The first-ever in-depth attempt to quantify everyday giving in India, a new report aims to shine a spotlight on the ways in which Indians can contribute to the country's social development.

India has the greatest number of people volunteering and donating money in the world, ahead of both the USA and China. At INR 34,242 crore in 2017, everyday giving in India is at least twice the size of everyday giving in China, and over 30 percent more than Indian ultra/high net worth individual (U/HNWI) giving. Everyday givers are ordinary citizens who contribute their money, time, skills, voice, and goods to four primary destinations: local community, religion, disaster relief, and nonprofits.1

These figures come from the first-ever effort towards quantifying the everyday giving market in India. Sattva Consulting, with the support of Bill & Melinda Gates Foundation and Rohini Nilekani Philanthropies, has conducted an in-depth market analysis over the past six months, reviewing existing literature, and collating primary data through interviews with more than 85 experts, and surveys with more than 700 people and 100 nonprofits. The findings, featured in the report ‘Everyday Giving in India: Harnessing the potential of a billion givers for social impact’ delves into the data, solutions, innovations, challenges, and opportunities for everyday giving.

Because a significant portion of everyday giving occurs through informal channels, and data reporting within formal channels is inconsistent, the study has tried to fortify its market calculations by triangulating data2from different sources: (1) government reports on foregone revenue from charitable donations and FCRA reporting on foreign contributions received by nonprofits, (2) nonprofit annual reports on donations received from individuals, and (3) funds raised by crowdfunding platforms, marathon fundraisers and others (derived from secondary research and qualitative interviews with experts). Given the inherent challenges around scale and paucity of data, the study admits that most of the research reflects the landscape of metropolitan areas, thereby carrying a language bias.

Related article: Retail giving: The power of many

So, what does India’s everyday giving market look like?

Informal giving to community and religion accounts for 90 percent (INR 30,700 cr) of everyday giving. This occurs predominantly in cash and is largely untraceable. Community giving (INR 21,500 cr) covers health emergencies and the basic needs of community members such as domestic help or the homeless. Religious giving (INR 8,800 cr) goes to religious or spiritual institutions, from which around 13 percent filters down from these institutions to charitable causes and nonprofits.

90 percent of informal everyday giving is directed towards community or religion.

Formal giving on the other hand, accounts for a mere 10 percent of everyday giving, split primarily between charitable giving to nonprofits, and giving towards disaster-relief. According to industry experts, of all disaster-relief giving, half goes to government schemes such as the Chief Minister’s Relief Fund (CMRD), and the rest goes to nonprofit relief efforts, such as Goonj’s relief drive, for example. 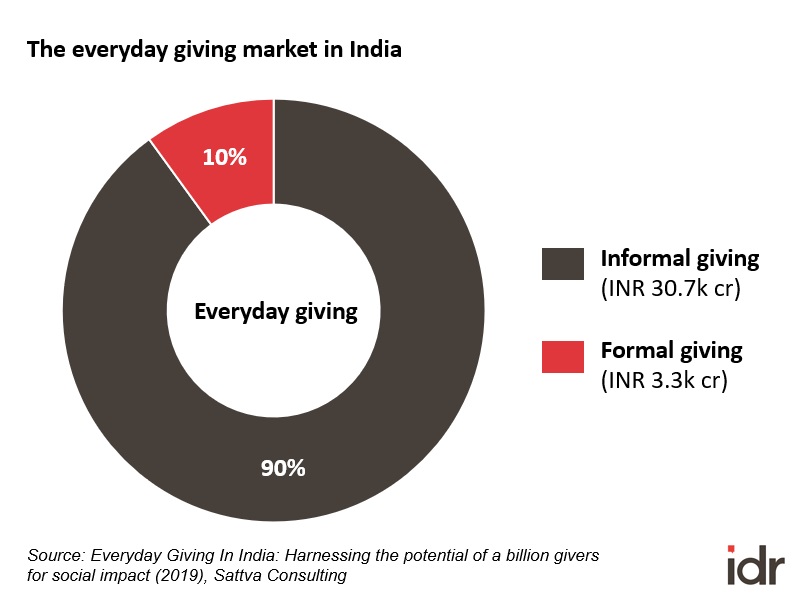 Philanthropist Rohini Nilekani is of the opinion that while informal giving must continue, formal channels present new possibilities, such as consolidating funds for medium-term projects rather than just immediate relief. “Formal giving can be structured beyond identity- and religion-based giving, and can allow people to feel like they are active participants of civic transformation,” she says.

How do we compare to other countries? 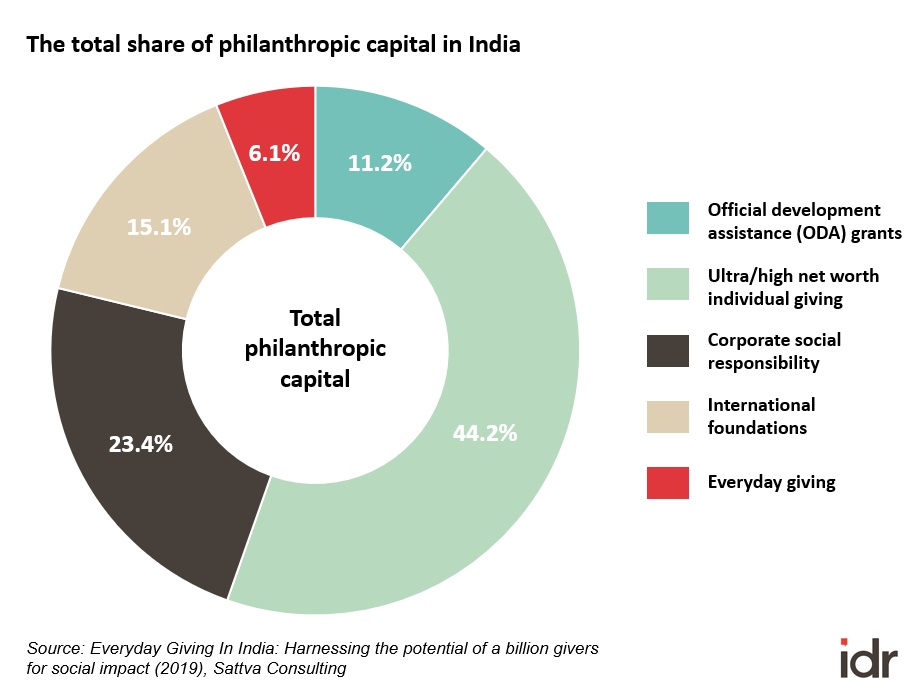 In China, everyday giving has risen to account for ten percent of total philanthropic giving, largely due to policy and technology barriers being eased, which drove initiatives like WeChat Pay, Tencent Foundation, and the 99 Charity Day (which raised USD 195 m in three days in 2017).

To contextualise this in terms of GDP, contributions from individual givers (everyday givers as well as U/HNWI contributors) form two percent of the United States’ GDP, but just 0.24 percent of India’s.

Can online channels pave the way for greater giving?

Nonprofits garner funds through a combination of offline, online, and hybrid formal channels. More than 80 percent of everyday giving is acquired through offline channels like telemarketing and face-to-face interactions, but online and mixed channels are steadily on the rise. Backed by the rapid growth of digital shopping and payment apps, paired with millennials having a penchant to give back,3online channels are growing quickly, with a compound annual growth rate (CAGR) of more than 30 percent.

Related article: Raising money through online channels: How to get it right

Mixed channels such as payroll giving and marathons do comparatively better than purely online channels, by deploying offline strategies to engage givers, and then push them to giving online. Other offline channels are also increasingly becoming mixed channels, and givers who are reached through face-to-face interactions and telemarketing are being driven to donate through online means—bank transfers and digital payments.

Up to 40 percent of funds acquired offline are now being collected online.

Though offline giving is most likely going to continue to dominate—due to its size and steady growth at 20 percent CAGR—well into 2021, it is interesting to note that up to 40 percent of funds acquired offline are now being collected online. This increased conversion to online giving allows for a way to design fundraising in more informed ways, and increase the efficacy of the market.

As the world’s fastest growing e-commerce, smartphone, and mobile wallet market, there has been an overwhelming response to early digital giving interventions, and India is poised to rapidly move to these nascent channels of giving. “We believe everyday giving could leapfrog to become a significant contributor to philanthropic giving in India in the next three to five years. Indian residents and diaspora’s growing earning capacity, and response to nascent digital giving innovations in payroll giving, crowdfunding, and e-commerce-based giving could be central to this growth”, says Aarti Mohan, co-founder of Sattva.

PayTM users raised INR 10 cr in 48 hours and INR 30 cr in a week for the Kerala floods, and INR 7 cr was raised in 36 hours for Pulwama families. An estimated INR 5.5 cr is raised per year for cancer care via Ola’s ‘My Ride. My Cause’. And an online giving collective, #GivingTuesdayIndia grew from raising INR 1.4 cr in 2017 to INR 9 cr in 2018.

Everyday givers report several barriers to giving to nonprofits—lack of reliable information on where and how to give, uncompelling narratives and low engagement, regulatory bottlenecks like FCRA, and perceptions of low credibility and transparency in the nonprofit sector.

Most Indian nonprofits look to everyday giving only when other funding streams are inaccessible.

But aside from this, the fact remains that most Indian nonprofits are not really trying to tap into retail giving, and look to everyday giving only when other funding streams are inaccessible. Experts say that there are only around 30-40 nonprofits in India that have actively taken up retail fundraising, with an informed approach, and customised systems and processes to ‘ask’ givers to give. Most other nonprofits receive funds inadvertently, if at all.

The opportunity to grow everyday giving among nonprofits is significant, but through in-depth qualitative interviews and existing literature, the report found that there are some key barriers to nonprofits opting to pursue retail giving. These include mindset barriers, lack of know-how, lack of fundraising capabilities, inadequate support to pilot retail fundraising, friction with giving platforms, and struggles with technology adoption.

How can everyday giving grow in India?

To build a sustainable culture of everyday giving, meaningful engagement is critical. The overwhelming amount of religious and community giving in the country points to the fact that everyday givers are eager to help the people they know. Giving to social causes requires them to do so with strangers they cannot put a face to, and nonprofits that have woven citizen engagement into their mission have had success with everyday giving.

The most successful everyday giving channels have designed global solutions to fit the Indian context.

There is undoubtedly value in learning from what has worked in other countries, but the most successful everyday giving channels and nonprofits have designed global solutions to fit the Indian context, adapting it for Indian behaviour and thinking. Online platforms are developing systems to help create the right communication, and account for offline payments like cheques, as some users might prefer this to an online credit card transaction.

Leveraging mainstream communities is another avenue to growing everyday giving. Increasingly, urban communities are coming together online, but even offline, due to shared interests, and are actively anchoring initiatives around social and environmental development. From waste water treatment and lake-revival efforts, to marathon and cycling groups, people are coming together for various causes, and opportunities for digital platforms to funnel awareness to giving are abundant.

Tags: crowdfunding, fundraising
We want IDR to be as much yours as it is ours. Tell us what you want to read.
writetous@idronline.org
ABOUT THE AUTHORS