Why we must listen to farmers

Agriculture value-chains can only be strengthened by listening to multiple actors; most importantly, farmers.

India has been witnessing a spate of month-long farmer protests across the country, particularly in the national capital, against the recently introduced farm bills by the central government. One of the major reasons behind these agitations, including calls for repealing the law, is that farmers were not actively involved in the policymaking cycle of these laws, which they deem as unjust, and only catering to large corporate houses.

Agriculture, even with declining shares in India’s gross domestic product (GDP), plays a crucial role in the country’s overall economic and social well-being. There is still a large dependency on this sector for income, employment, and national food security, with around 59 percent of the country’s total workforce employed in agriculture. This workforce not only includes farmers, but also farm labourers and those employed in agriculture-dependent industries and services, for instance, the textile or sugar processing industries. In such a context, agriculture cannot be viewed as farming alone. Instead, it must be viewed as a holistic agriculture value-chain (AVC) system, which includes farming, aggregating, processing, and retailing.

Across this system, there are multiple actors (farmers, traders, retailers, and so on), variables (climate, market prices, and so on), and institutions (seed, fertiliser and other input companies, regulatory bodies, and so on) involved, resulting in dynamic relationships between and within these groups. However, often, these relationships are not taken into account when making policies, just as critical perspectives like those of farmers are discounted. This leads to increased power imbalances between actors, with marginal and smallholder farmers getting excluded from the AVCs. Moreover, it weakens the adoption of policies, technologies, and practices necessary for strengthening AVCs overall.

It is this exclusionary approach that has led to the largest agrarian protest the country has seen in recent memory. What we need instead are collaborative and inclusive multi-stakeholder partnerships and discussions, so that all actors in the AVC can benefit from policies.

AVCs in India, though centred around farmers are influenced by multiple actors at every stage from the production of a commodity on a farm to its final purchase by a consumer. These different actors range from market actors such as wholesalers and agribusinesses to policy- and research-based stakeholders. The latter includes different agriculture institutes established under Indian Council of Agricultural Research (ICAR), extension services like Krishi Vigyan Kendras (KVKs), and consumers. In simpler terms, farmers are embedded in larger systems of activities and relationships.

And all actors in any AVC, along with farmers, need to work together for its smooth operation. This is because all of them have different expertise, viewpoints, and specialised roles that can complement each other, and address the constraints and opportunities that AVCs face. Disregarding any perspective can lead to the failure of even well-intended interventions. This article, using two examples from Sikkim and Telangana, looks at what we can learn from including multiple perspectives when strengthening any agricultural value-chain.

Sikkim is a small eastern Himalayan mountain state nestled in Northeast India, which in 2003 passed a resolution to completely transition to organic farming. Twelve years later, in 2015, it became India’s first fully organically farmed state. In fact, this achievement was possible largely due to the inclusive, multi-stakeholder governance it employed in adopting its organic policy. The state used a phased approach to transition from conventional agriculture to organic farming. It focused on involving and aligning stakeholders from the production, technical, policy, and marketing activities of the AVCs with the organic mission.

First, the agriculture and horticulture government departments and extension officers held a series of workshops and training sessions with local panchayats and the farming community under the Sikkim Organic Mission (SOM) to get producers—the main actors—vested in the programme. Next, the government controlled the supply of pesticides and chemical fertilisers into the state, pushing for the use of only organic manure since 2003. The state government also bore all the costs associated with the organic certification process, so that all of its farmlands could be organically certified.

Additionally, since Sikkimese farmers traditionally grew a large number of their crops organically, shifting to organic farming practices was easier for the local growers. On the marketing side, the government got multiple service providers—Sikkim State Co-operative Supply and Marketing Federation Ltd (SIMFED), North Eastern Regional Agricultural Marketing Corporation Ltd (NERAMAC), Justrop Organic Sikkim—to focus on actively marketing and spreading awareness about the different organic produce grown in Sikkim. These helped organic growers across the state receive better prices for their produce. It was also beneficial because these organisations worked directly with the growers, helping them improve their agri-management practices. Further, the organic mission collaborated with banks like National Bank for Agriculture and Rural Development (NABARD), that supported the creation of Farmer Producer Companies (FPCs) for local growers in East and South Sikkim. In this way, the SOM actively involved multiple stakeholders along the value-chain, so that they could complement one another’s expertise and function towards achieving 100 percent organic status. And the instances when they failed to do this, local growers did not end up adopting the intervention.

For example, in the case of large cardamom, the government established auctions in order to make the cardamom market more organised and to help in price protection for farmers. However, although large cardamom fetched farmers higher prices in government auctions, they continued to sell to local village-based traders instead. This is because there was a lack of trust, awareness, and information about the new system; there were delays in payment; the auctions were held at a long distance from the farms; and, farmers had limited knowledge of online banking transactions, which was necessary to participate in the auctions. Selling locally, or to collectors who came directly to their farms to buy the cured produce, was preferable. Unlike the auction which was dependent on digital banking, collectors came to remote farms where accessing banking facilities like ATMs or online transactions was extremely difficult; and, they paid in cash which is a major advantage for small farmers.

The auction intervention failed to become popular because the government assumed certain farmers’ needs, and failed to understand and integrate their complete perspective in designing what was a technically well-established system.

As an agrarian state, Telangana is in complete contrast to Sikkim. Unlike Sikkim, which mainly focuses on marketing high-value cash crops owing to lower yields in mountain regions, Telangana produces paddy in large quantities.

In 2020, there was a steep fall in prices of a high-value fine variety of rice called Sannalu. Policymakers in Telangana had recommended that farmers grow Sannalu, as it commands a higher price in comparison to the regular coarse variety that was being cultivated and sold. However, this intervention did not pan out because the quantity of fine variety grown exceeded the procurement and processing capacity of the rice mills. On a single day, the capacity of tractors in Miryalaguda—the hub of the local rice industry—exceeded 3,000 tractors, as against the actual capacity of 1,500 tractors per day. The mills were not prepared for procuring, storing, and processing such large inflows of fine variety as they were not active participants of the planning process. This led to a situation where instead of selling at prices of approximately INR 1,800 and above, farmers were forced to sell at INR 1,400 or even less per quintal. Further, there were long waiting periods for the trucks carrying the harvest—up to four days—to reach the selling point. During this time, large quantities of rice got damaged, further depressing the prices. Such situations often deter farmers from shifting to newer or better crop varieties.

Given the variety of stressors facing AVCs, it is important to engage all actors for designing and adopting sustainable solutions.

These are just a few examples that point to the importance of including diverse perspectives of multiple actors when it comes to developing any agricultural value-chain. Given the variety of climatic and non-climatic stressors that AVCs will continue to face, it is important that we actively engage all actors for designing and adopting sustainable solutions. Collaboration can address complexity better than any individual stakeholder can on their own.

One way to do this is by creating multi-stakeholder platforms. These platforms can range from informal governance structures focused on a single sector with a defined geographic scope, to global, formal networks trying to address a wide range of issues. These platforms can be short-duration, multi-stakeholder capacity building and experience-sharing workshops like those used in Sikkim, or a smartphone-based app or social media group that shares timely, credible information to members.

Dr Reddys Foundation for instance, (where I work), has developed a community platform called MITRA, which acts as a bridge between farmers and other powerful AVC actors in relaying information. It includes content on best agricultural practices, climate-friendly interventions, farm mechanisation, improved irrigation and water management techniques as well as digital and financial literacy, among other information. Such platforms not only relay information but also take critical feedback from farmers when developing and promoting interventions. This is particularly beneficial, given that agriculture-related information and knowledge is otherwise typically disseminated only through government extension agents, without much room for two-way communication.

Enhanced communication through multi-stakeholder platforms can promote mutual understanding between actors, create a shared vision, help support innovations, and also prevent possible bottlenecks and conflicts that can threaten the smooth functioning of the AVC. Such platforms help actors voice their concerns which can make value-chain collaborations more inclusive and productive.

Tags: farming, organic farming
We want IDR to be as much yours as it is ours. Tell us what you want to read.
writetous@idronline.org
ABOUT THE AUTHORS 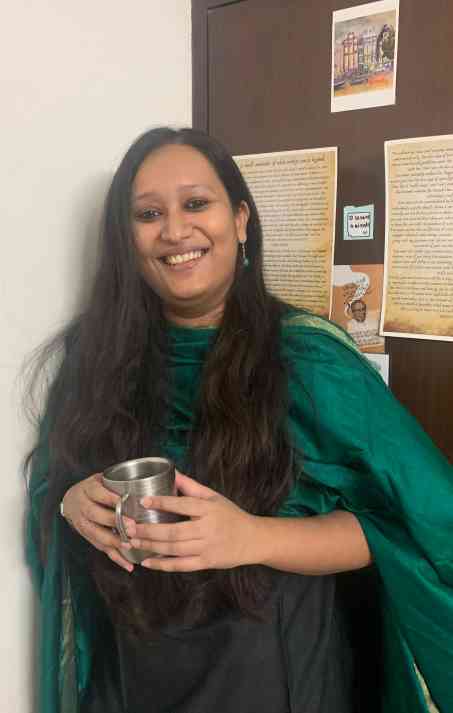 Sudeshna Maya Sen leads the climate action work at Dr Reddy’s Foundation (DRF). Her role is to implement mitigation and adaptation strategies in DRF project areas to reduce the impact of climate change. Previously, Sudeshna worked with the climate change department, Government of Gujarat. She has a PhD in Climate Change Adaptation funded by Himalayan Adaptation, and was a part of the Water and Resilience (HI-AWARE) Research Programme from TERI School of Advanced Studies, New Delhi. She also has an MSc in Climate Science and Policy from TERI University.