“These laws will make us poorer”

Small and marginal farmers explain why they are protesting the new farm laws.

Thirty-seven-year-old Pradeep Singh offered a meticulous breakdown of the amount of money he spends to grow rice on one acre of his farm in Haryana’s Jhajjar district.

Finally, it costs him Rs 3,500 to rent a tractor trolley to carry the crop to the market, and Rs 2,000 for diesel for the journey.

“The common man does not know this,” said Singh, who lives in Mahandipur village in Bahadurgarh tehsil. “Even the government will not know this [process]. Ask the agricultural minister or the prime minister… or even the Haryana chief minister. The real farmer is sitting here in front of you.”

They fear that the legislations will end the minimum support prices they receive from the government leaving them at the mercy of corporations.

Pradeep Singh is among the thousands of farmers from Punjab, Haryana and Uttar Pradesh who have gathered at Tikri, on the Delhi-Haryana border since November 25 to demand that the Bharatiya Janata Party government repeal three new farm laws. They fear that the legislations will end the minimum support prices they receive from the government on key crops, leaving them at the mercy of corporations.

Related article: The farm acts: All you need to know

As the farmers made their way to Delhi, they faced water cannons, tear gas shells and police batons en route.

Hundreds of tractors and trolleys have occupied at least 5 km of the Delhi Rohtak Corridor at the Tikri border. The farmers say they have brought along food and supplies that will last them six months.

On Tuesday evening, some farm leaders were invited to meet with Home Minister Amit Shah, but the talks were inconclusive.

Earlier on Tuesday, Scroll.in spoke to three protesting farmers with small or marginal holdings about the economics of their operations and why they oppose the new laws.


According to the 2016 Agricultural Census, 86 percent land holdings in the country are small and marginal holdings of less than five acres.

Singh earns a total of Rs 20,000 after six months of toiling on his two-acre plot. This would not be enough for him to support his family, he said, so he leases another 10 acres of land.

To get started this season, Singh took a Rs 7 lakh loan from a middleman. But in the end, he still had Rs 2 lakh of this loan outstanding. The lack of workers during the coronavirus lockdown made the harvest difficult, Singh said.

He was also hurt by larger dynamics: the economic sanctions imposed by the United States on Iran, one of the biggest importers of rice from India. The sanctions hurt farmers like Singh who sells his produce at Najafgarh in South West Delhi, 22 km away from his village. 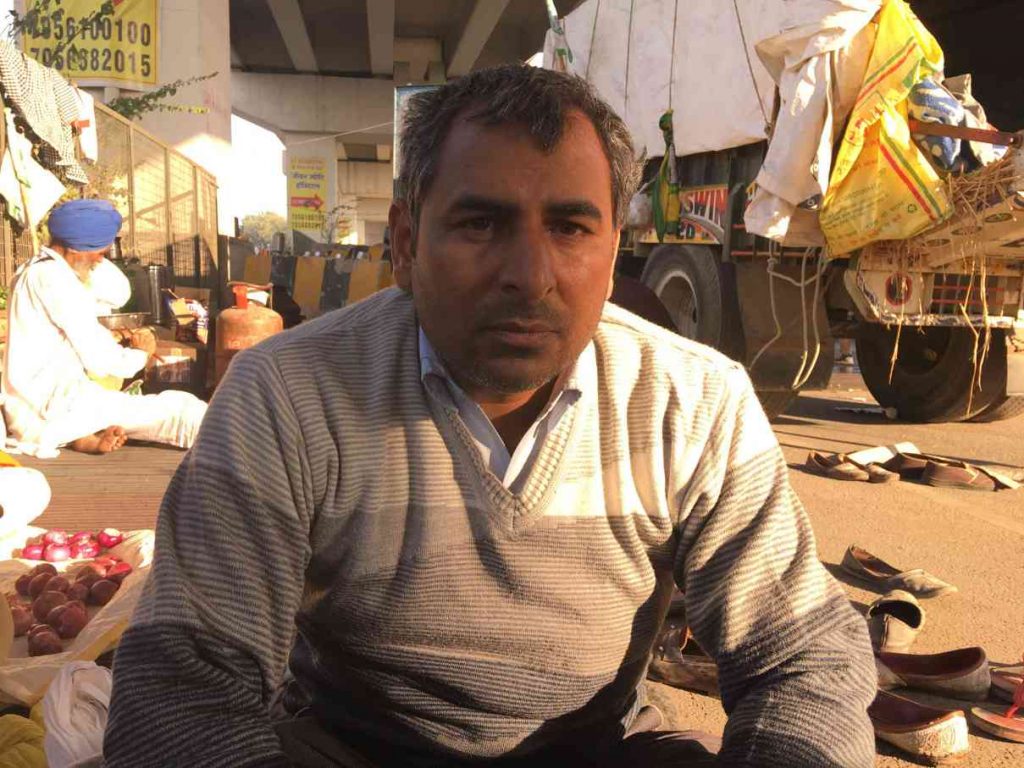 As a consequence, Singh struggled to support his family and was unable to pay the Rs 5,000 fee to admit his five-year-old daughter to primary school.

But he had a more pressing worry. If the new laws are implemented, he may not be able to pay back the loan he took from the middleman even after the next crop cycle—even though the man will not charge him additional interest.

Singh explained that the new laws do not guarantee that the farmers will receive the minimum support price they now get from the government. Instead, they will be left at the mercy of private buyers.

“Suppose if small farmers come together to enter into a contract with one private entity and decide earlier on that they will grow potatoes and sell it for Rs 30 a kilo,” Singh said. “They give us the seeds and fertiliser and when the time comes for harvest, the corporations will come and buy it at the decided rate even if the market price is Rs 50. They will not increase it.”

No farmer wants the middleman system to end.

However, he said, “if the market is down and the price is Rs 6 for a kilo, then they will bicker with us while buying. This will kill the farmers. Who will he go to? The SDM [sub-divisional magistrate] will not listen to the farmer.”

Under the new laws, disputes between farmers and buyers are to be settled at the level of a sub-divisional magistrate, not in civil courts.

“No farmer wants the middleman system to end,” Singh declared. “They [Centre] are giving us a lollipop, we will keep sucking on it but in the end we will suffer.

Gurpreet Kaur, a 48-year-old farmer came to Tikri on November 26 from Chakar village in Jagraon tehsil, in Ludhiana, Punjab. She was accompanied by her husband and two teenage children. In Chakar, she farms wheat, rice and vegetables on 11 acres of land. She said it takes an investment of approximately Rs 20,000 to farm one acre of land. This includes the cost of diesel, fertiliser, pesticide, and daily wages of Rs 400 for 20 workers. 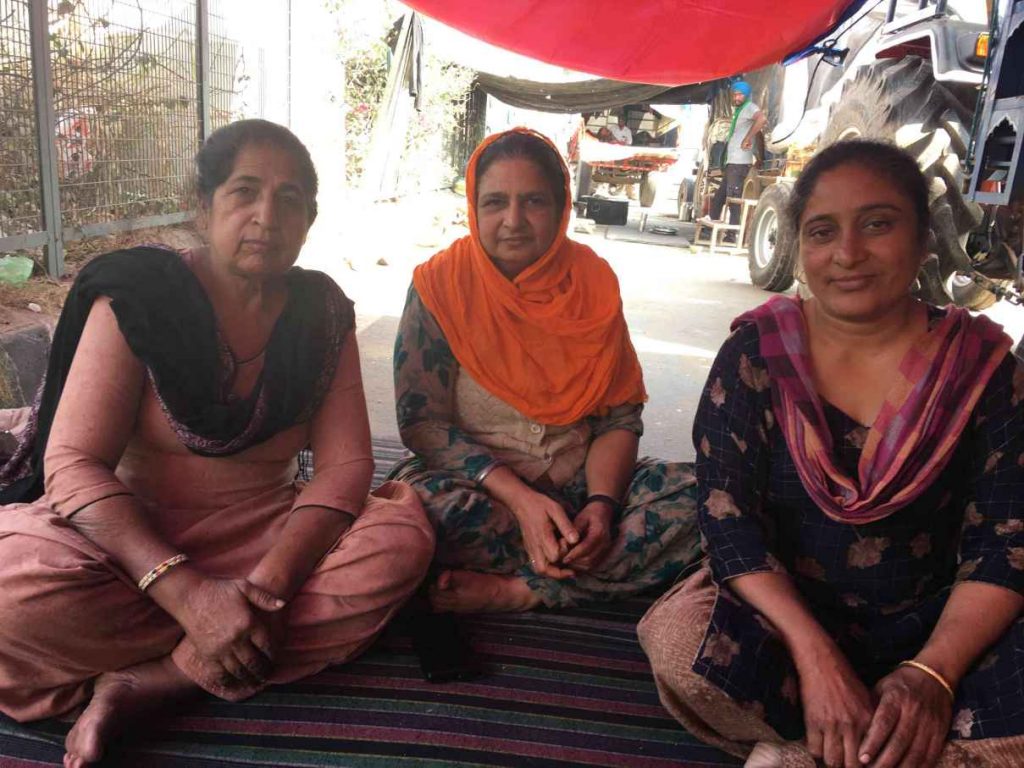 Once the harvest is done, Kaur said, the produce goes to a market 2 km away from the village where the wheat is sold through a middleman for Rs 1,880 per quintal.

“For us, our middlemen is good,” she said. “We are free of tension if we sell to him and he sells the wheat at a good rate.”

Kaur said that the Bihari workers employed on her fields had cautioned her about their experience after similar laws passed in their state in 2006. They “told us that these laws were against farmers”, she said. “They said the [state] government turned them into daily wagers.”

This year, Kaur said the harvest was difficult because migrant workers had gone back to their home states as a consequence of the Covid-19 lockdown. “The harvest spoilt because we did not have any workers,” she said.

She said that after six months of work, her family had earned around Rs 1 lakh after paying off their Rs 5 lakh loan to the middleman.

“Some do not even have this much,” she said. “We would not be here protesting if we were rich farmers. These laws will make us poorer.”

Kaur said that farmers from her village have drawn up a rotational schedule to come to Delhi for the protests. She was set to go home on Wednesday.

But she noted that the protests had been underway in Punjab since July. Over the past months, Kaur has joined farmers across Punjab to sit on rail tracks tracks to block passenger trains. “We would sit for the entire day…it is going on till today,” Kaur said. “We have shut all their [Mukesh Ambani and Gautam Adani] [petrol] pumps and stores in Punjab.”

Related article: What’s next for agriculture in India?

Fifty-three year old Surjeet Singh came to Delhi on November 27 from Lehal Khurd village in Lehra tehsil in Punjab’s Sangrur district. He grows wheat and rice on the five acres of land that he owns.

He broke down his economics per acre. He pays Rs 4,500 to hire three workers from Bihar, Rs 2,000 for diesel for his tractor, Rs 2,000 for fertiliser, Rs 3,000 for pesticide, and around Rs 6,000 for workers to cut the harvest. His total expenditure over five acres is around Rs 1 lakh, he said.

This year, he joined with two other farmers to buy a second-hand tractor for Rs 3.5 lakh. It had a Happy Seeder machine that would allow them to cut up the crop stubble instead of burning it.

For a two-crop cycle, Singh takes a loan every six months to meet these expenses. “The private bank gives around Rs 1 lakh,” Singh said. “Once it is time for the harvest, we take it to the middleman, who transfers the money to the bank. There is not much left with us.” 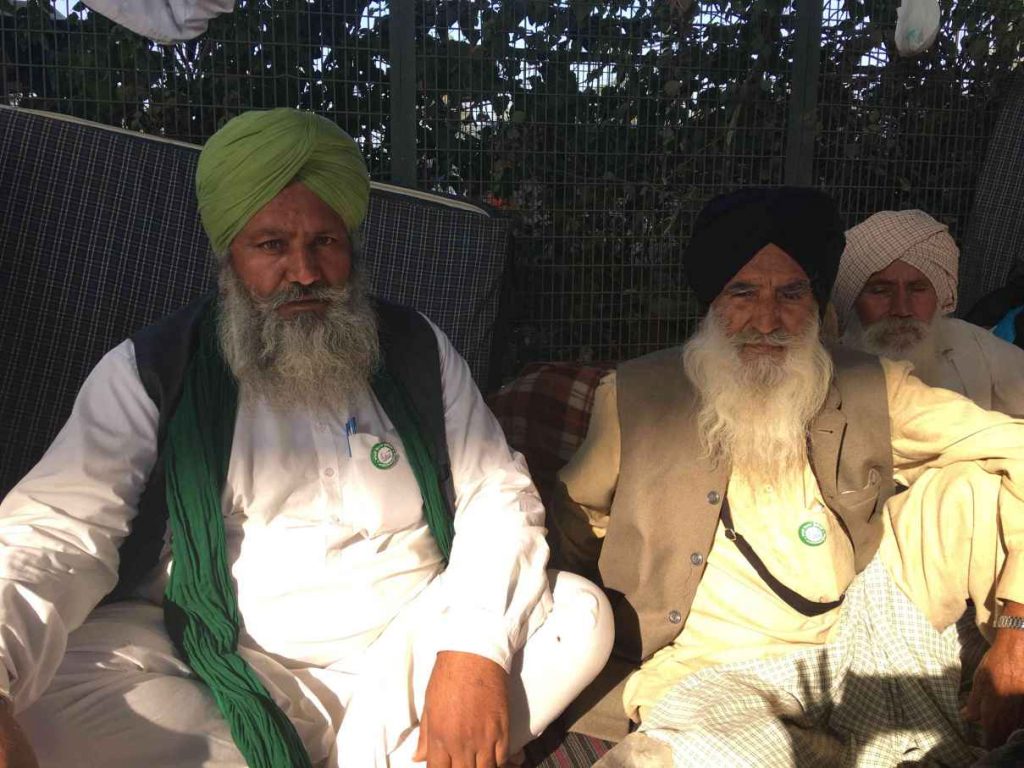 If Singh reaps a good harvest, he is left with Rs 20,000 per acre after he has paid off his loans. In addition to the income from farming, he rears two buffaloes that earns him Rs 50 per litre of milk.

Despite the tight situation, he said farmers like him would be better off without the new laws. “A lot of farmers cannot deal with the banks directly,” Singh said. “Some farmers are illiterate and use only their thumb print as a signature to deal with the middlemen. The middlemen helps them put the money in the bank to pay the loan.”

Farmers in the village have an easy relationship with the middlemen in their market, Singh said. “We can even take Rs 5 lakh advance payment from them because we know each other,” he said. “They are like family. We would never call them bicholi [middlemen]. They are the ATM and bank for us.”

Under the new laws, small farmers would be exploited, Singh said. “The big businessmen will buy in bulk and we will be looted,” he said. At present, he sells his wheat for Rs 1,880 per quintal at the markets. “If these laws come then no one will buy it for even Rs 1,000,” Singh said.

This article was originally published on Scroll.in

Tags: Farm Bills, farmers, rights
We want IDR to be as much yours as it is ours. Tell us what you want to read.
writetous@idronline.org
ABOUT THE AUTHORS 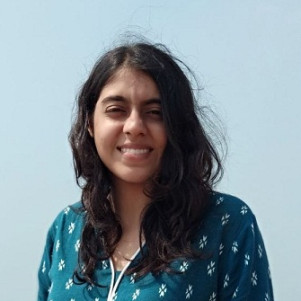 Vijayta Lalwani graduated from the Symbiosis Centre for Media and Communication, Pune, in 2016. She previously worked as an assistant content producer at Pune 365, and her work has been featured on PARI, Scroll.in, Quartz, and Dawn.com 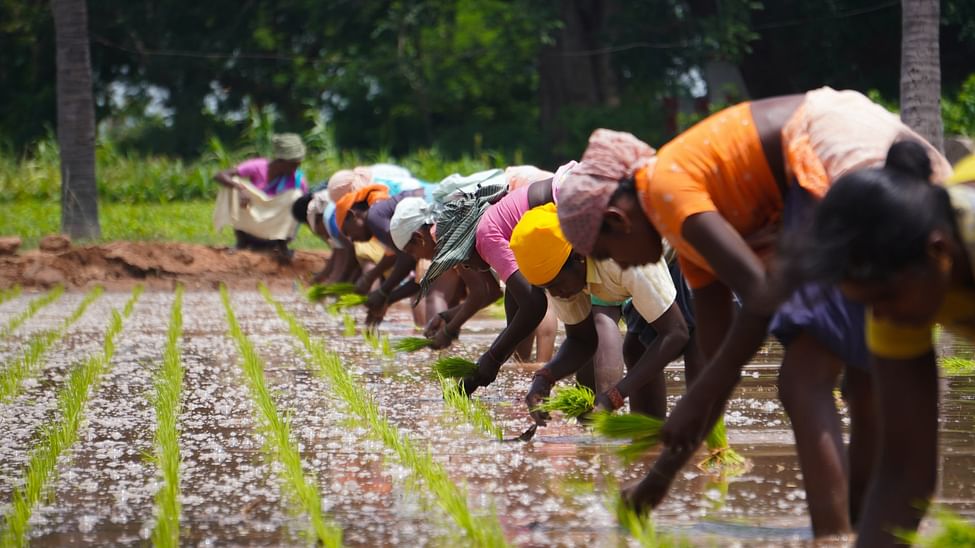 Agriculture
Old wine in a new bottle?
A look at how the evolution of organic farming in India is harming farmers by ‘deskilling’ them.
by Dibyendu Chaudhuri, Parijat Ghosh | 5 min read 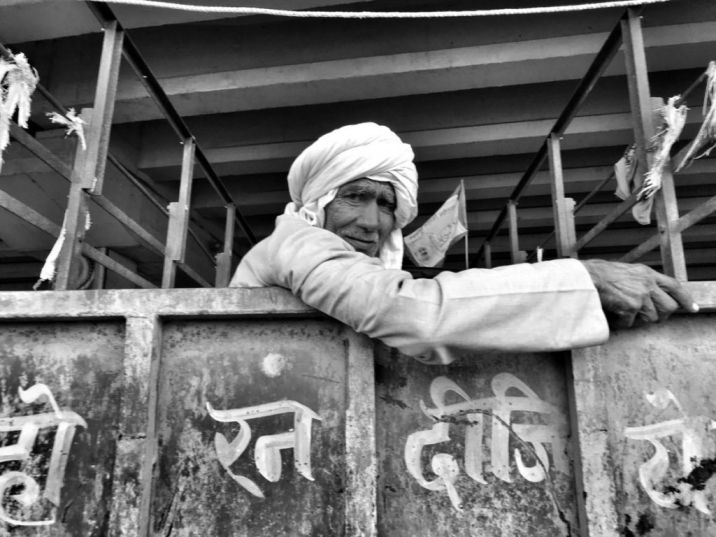 Agriculture
Photo essay: Farmers gather in protest
Farmers from across the country gather at Delhi’s borders as they continue to protest the new farm laws.
by Shome Basu | 2 min read 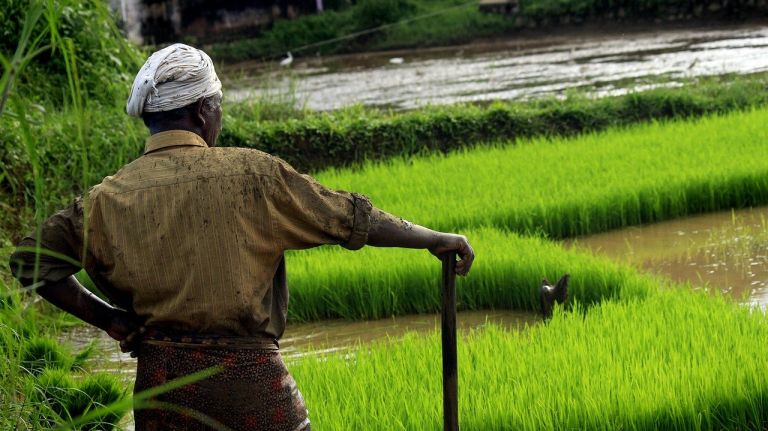 Agriculture
The farm acts: All you need to know
In order to cut through the noise surrounding the farm bills, IDR has curated select articles and videos that explain the impact of these bills on farmers.
by India Development Review | 6 min read