Drawing from the Ministry of Corporate Affairs database, this report finds that more than 50 percent of companies have not reported their net profit or CSR spends, and amongst those who did, there are noteworthy disparities in giving.

Is corporate India complying with the CSR mandate? When they do, how much do they spend on social projects? Which sectors do they invest in primarily? And how is their funding distributed among states?

To answer these questions, Ashoka University’s Centre for Social Impact and Philanthropy has released a report—the first comprehensive study of this kind, with source data1 scraped directly from the Ministry of Corporate Affairs database. The database, detailing corporate sector spending reported under the Companies Act 2013, contains data from more than 19,000 companies across India.

And the data has a lot to say. The CSR spend of all 19,184 companies in 2015-16 was equivalent to the combined quarterly net profit of just two companies—Reliance Industries and ONGC in Q1, 2018. And while companies have now had quite some time to address initial teething problems with their CSR, and formulate better strategies, the numbers suggest that there are still large discrepancies in the way CSR projects operate.

Nearly 44 percent of CSR projects are located in the four states that hold just a fourth of India’s population.

Nearly 44 percent of CSR projects are located in the four states that hold just a fourth of India’s population—Maharashtra, Tamil Nadu, Karnataka, and Gujarat, while densely populated states like Uttar Pradesh and Bihar get just a fraction of this.

The report holds a mirror to the current CSR landscape, and points out some of the gaps that exist. Here are some of the report’s highlights:

How much has the corporate sector contributed? 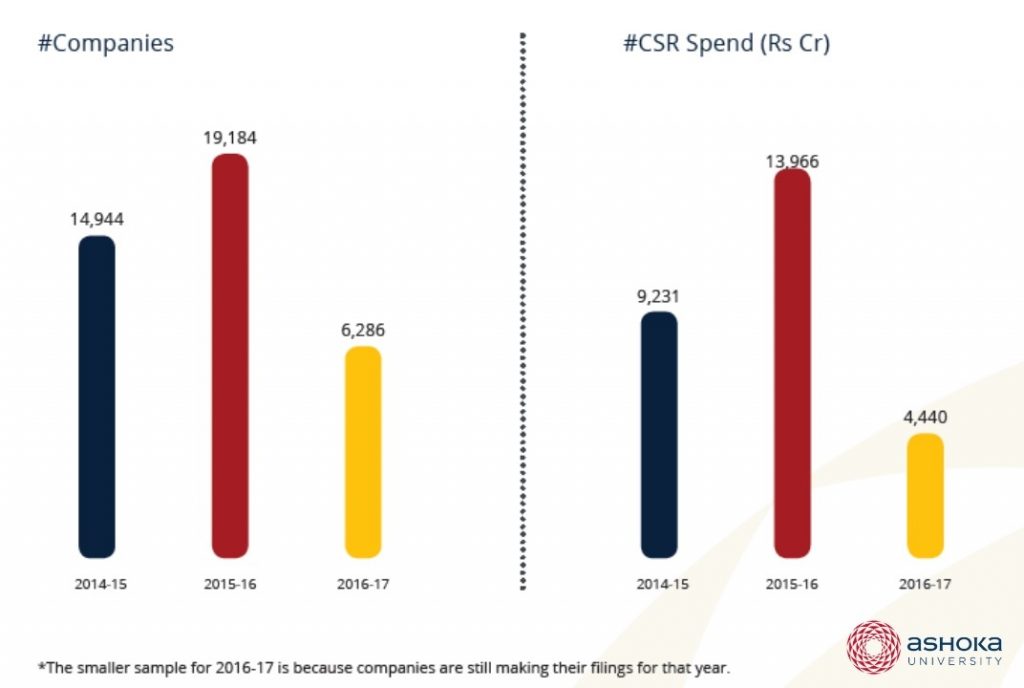 Related article: Philanthropy in India is growing: Fact or fiction?

When trying to calculate whether companies adhered to the mandatory-minimum two percent CSR spend rule, the report found that 10,674 companies–56 percent–out of 19,184 had not provided either their net profit or CSR spend. From the companies that did, just 40 percent have complied with the rule, spending two percent or more of their average net profit. There is a large concentration of spending among top companies, and while government companies make up just two percent of the CSR universe, they account for 30 percent of the overall CSR spend. 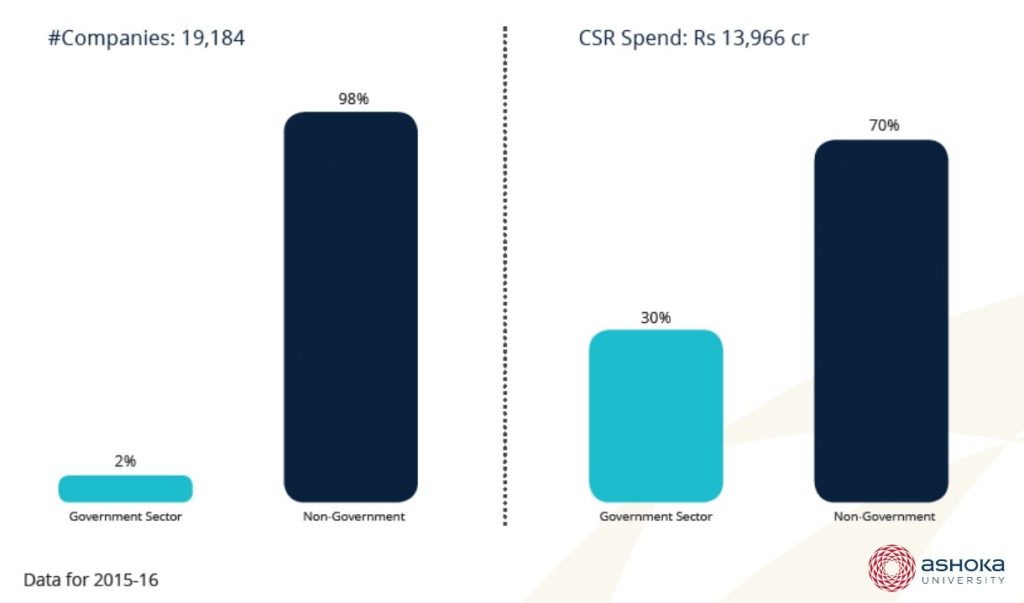 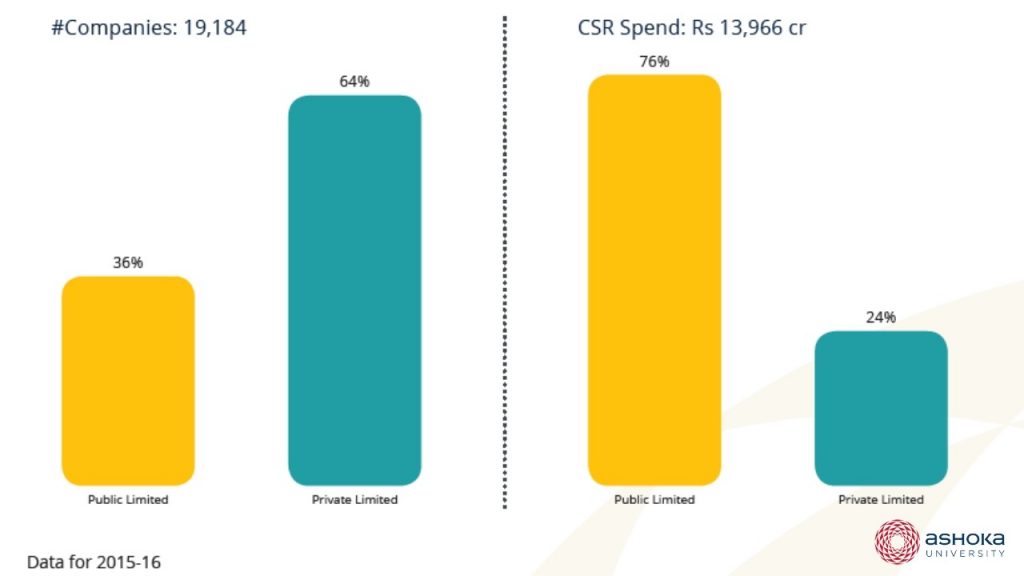 In the same vein, the 13 percent of companies that are listed in the stock exchange account for 60 percent of CSR spend. What is the geographical distribution of spends?

Maharashtra received the largest share of CSR spends at 13 percent.

This skew translates into disproportionate geographical distribution of CSR funds, despite the fact that one-third of CSR spends are listed as ‘pan-India projects’, and can’t be traced to any one particular beneficiary state. Of the remaining two-thirds, Maharashtra received the largest share of CSR spends at 13 percent.

Because companies appear to be guided by their state of registration, they locate their projects in-situ and some of the most populous and less developed states like UP, Bihar, MP, and Odisha, don’t receive enough corporate attention. 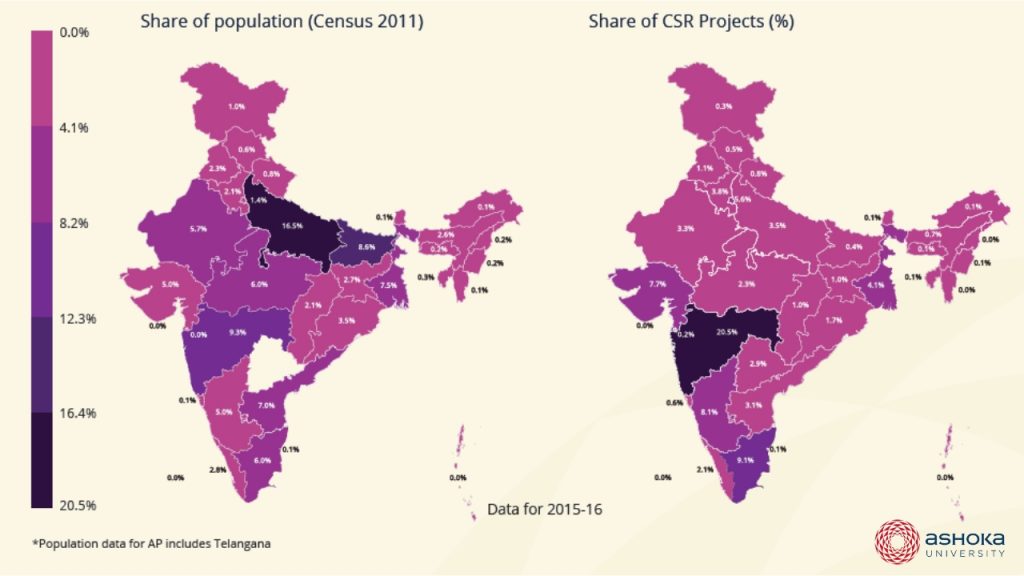 When it comes to state-wise spends, CSR from government-owned companies is highest in Andhra Pradesh and Odisha, and from public limited companies in Maharashtra and Karnataka.

Which sectors is CSR investing in?

Every project has to fill out a sector field in the CSR database, and about 46 percent of CSR spend went into education and healthcare projects. On the other hand, women empowerment focused projects received the smallest share—0.89 percent—even lower than sports-promotion. 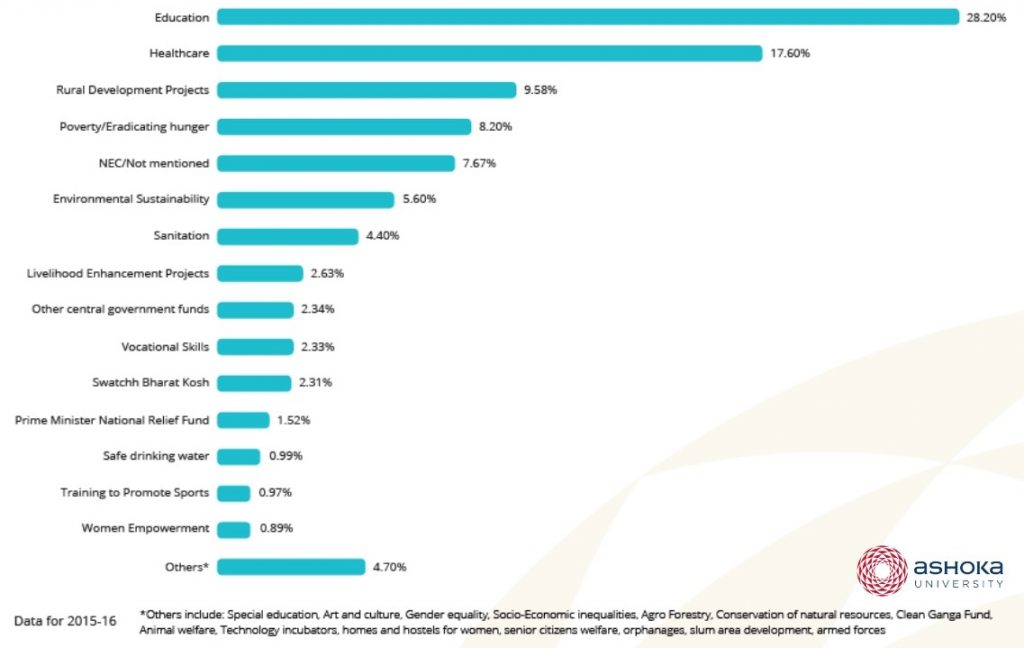 What are the challenges to finding accurate CSR data?

Despite the fact that the report derives data from the original source, the original database in itself is incomplete in several places. Stronger checks and balances can be implemented to improve the quality of data.

Companies should have to mandatorily fill all fields, and for a more meaningful reading of data, they should also file revenue figures along with their CSR spends. Reporting should also be uniform—some companies filed net profit in percentages while others in absolute values—if reported at all (49 percent did not file average net profit in 2015-16). For 65 percent, total CSR spend was either not reported, or did not match the sum of all projects when calculated.