Meet the sisters of Bhuj

A day in the life of a paralegal, who has been changing patriarchal gender norms across 200 villages in Kutch for the last two decades.

For the past 22 years, I have been working with the nonprofit Kutch Mahila Vikas Sangathan (KMVS), in some of the remotest villages in the Kutch region of Gujarat. Kutch is the largest district in India and it is very diverse—there are multiple communities, languages, clothes, food, and religions—this is the strength of Kutch. We work across the district, from villages along the long-winding coast to villages near the Indo-Pak border in the interiors of the Rann of Kutch.

I started my journey with KMVS as a self-help group leader, and later trained as a paralegal. For the last six years, I’ve been working as a full-time paralegal with the organisation. At KMVS, we help women access justice when they face violence at home, by helping them through the legal process or by supporting them and their families to resolve conflicts, as trusted mediators.

Related article: A day in the life of: A child protection volunteer

Our work does not end there. We also work closely with the Kutch police, through the Hello Sakhi helpline which we began in 2010. Operating out of the mahila police station (all-women police station) in Bhuj, the helpline allows us to reach more women. Earlier, we would travel to different villages, and this limited how many women we could serve. We still travel extensively to villages to conduct seminars on rights and entitlements, and to help women (particularly widows) access government schemes and services, but the helpline allows us to provide immediate support too.

Today, I have trained more than 400 women to become paralegals at KMVS.

When I started working at KMVS, at age 20, I had not studied beyond the seventh grade. My village school didn’t offer those classes, so despite wanting to continue, I couldn’t. Today, I have trained more than 400 women to become paralegals at KMVS. It was only this year that I considered completing my tenth grade, when my supervisor suggested that I give the exam and get my certificate. The organisation thought that it would help me, but also inspire the younger paralegals who I manage, to do the same. I was hesitant; being 42 years old, the last time I had studied formally was many years ago. But my colleagues supported me, and after studying hard for a few months, I passed.

Now, most of my time is either spent at the office in Bhuj or out in the field.

7.30 AM: My work hours usually start at 10 AM, when I jet off on my scooter to visit neighbouring villages, or go straight to the office. But on days like today, when nobody is available to respond to calls on the Hello Sakhi helpline, I go to the police station instead.

I remember when I first started out, I had never travelled on a bus. Back in Kalyanpar, the village where I grew up, women are not to step beyond the threshold of their homes. I am a Muslim and in my community, women aren’t supposed to step out alone and without a veil. Having led a sheltered life, I was hesitant to join KMVS.

But when the women from KMVS told us about the work they do, I mustered up the courage to join them. In the beginning, my husband’s family members would follow me to meetings, to see where I was going and what I was doing. My mother-in-law insisted on accompanying me as well. But after a few meetings, she admitted that the collective’s work was constructive, and that there was a lot to learn from our sisters. Over time, I was able to gain my family’s trust and support. Today, even with the recent lockdown in place, I travel to neighbouring villages on my scooter, to carry out my work every other day. 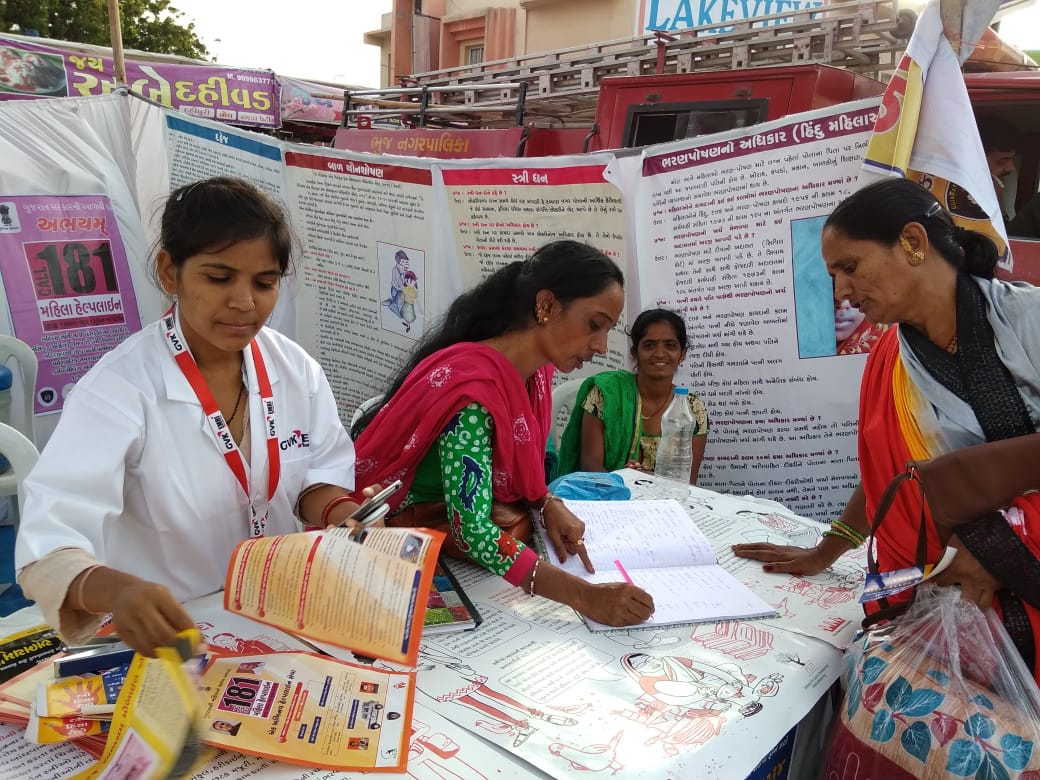 There are still a lot of elderly women who object to their daughters and daughters-in-law stepping out of the house, being part of a women’s collective, and raising their voice for a cause. | Picture courtesy: KMVS

8 AM: Once I reach the mahila police station, I respond to calls on the helpline, which is available between 8 AM and 9 PM, seven days a week, and even on holidays such as Diwali and Eid. I start by taking down the details of the person who is calling—her name, village, age, number of children, and so on—along with details of the issue she is facing. We have offices in all ten talukas (blocks) of Kutch, so depending on where the call is coming from, I contact paralegals and counsellors in that taluka and inform them of the situation. Usually, we ask callers to come to our offices, but if they cannot, we visit them.

Since I live in Bhuj, if there is a case nearby, I attend to it myself. We usually try to resolve all matters between women and their families themselves, consensually. But if the woman still feels threatened or is in danger, we take the case to the police.

10 AM: I get a call on my mobile phone while I am at the police station. There are about 200 villages on average that I work with, and since people know me well, they sometimes call my phone directly, rather than using the helpline.

I answer the phone—it’s Ramlal*, a man from a village nearby, calling on behalf of his daughter, Laxmi*.  He tells me that Laxmi’s father-in-law threw her out of the house last night. She accidentally added extra milk in the tea she was preparing for the family. Her father-in-law was enraged, and took the opportunity to beat her and kick her out. Laxmi is at her parent’s house now, and so Ramlal requests me to help them and intervene.

11.30 AM: I reach their house, and sit down to talk with Laxmi. We discuss the incident, and I tell her that her father-in-law has no right to treat her like this. When asked about her husband’s involvement in all this, she tells me that he tried to stop his father but was unsuccessful. We decide that it might be best if the couple separates themselves from the rest of the family for some time, so that Laxmi can get some space from her father-in-law. In their absence, her husband’s brother agrees to take care of their parents.

When situations like these are taken to the police, they can become an added stressor for the woman. Often, the issue is easier to resolve through counselling. However, in emergency situations, we use the police’s 181 women’s helpline vans, to reach women quickly and get them out of immediate danger.

2 PM: I go back to the office in Bhuj to get some administrative work done, and catch up with some of the paralegals I manage. A few of them, who work as paralegals part-time while employed at other companies or hotels, are worried about their income and savings, given the economic crisis that the pandemic has created. One woman has had to ask her 17-year-old son to join her at work, because her husband, a migrant worker, has not been able to reach them during the lockdown.

We recruit a new cadre of paralegals every year, in January. To do this, we go from village to village, speak with women, tell them about our work, and ask them to join us. We typically interact with the village sarpanch or ASHA worker first, to establish a connection with the village and use their help to identify which women might be interested in joining us.

Once the new batch of paralegals start, I train them on things such as domestic violence, the Protection of Children from Sexual Offenses (POCSO) Act, child custody laws, gender, and women’s rights, and so on. We also discuss prevailing social norms and mindsets. There are still a lot of elderly women who object to their daughters and daughters-in-law stepping out of the house, being part of a women’s collective, and raising their voice for a cause. We have to work hard to convince them and assure them that we aren’t doing anything wrong. Patriarchal norms prevent women from leaving their homes, but we counsel them, help them shed their fears, embrace change, and step out of their comfort zones.

Working with families over the years, we have been able to establish our role as a mediator; we do not blindly side with women.

4 PM: My phone rings again—this time, it’s a woman who is worried about her husband’s alcoholism and how he may treat her as a result. Working with families over the years, we have been able to establish our role as a mediator; we do not blindly side with women, but we let them know that they can rely on us for genuine, unbiased assistance. Doing this has enabled us to earn trust with other household members as well, which is why we can do what we do, and help resolve conflicts.

I counsel the woman, assuring her that if she feels threatened, we will send over a counsellor and paralegal, should the situation escalate.

Related article: A day in the life of: An Adivasi leader

5 PM: Before wrapping up for the day, I spend some time planning the next set of training sessions that we need to design for our paralegals. Thinking about this takes me back to my early days with KMVS. When I started working, I had to go from village to village to hold awareness sessions with women—about domestic violence, women’s rights, and our organisation. What helped me connect with women across villages was the fact that I was just like them, a village girl, who had not really stepped out of her house before.

Only if we are aware of our rights, our potential, can we break away from patriarchal norms that keep us confined in our homes. If I hadn’t stepped out or tried new things, I wouldn’t be where I am today. I wouldn’t have been able to go to Bhuj by myself, work as a manager, hold meetings myself, or help my sisters find their voice. At one point, we were even called the ‘Bhuj wali behenein’ (the sisters from Bhuj) and through my work, I have connected with more than 5,000 behenein across Kutch.

Tags: violence against women
We want IDR to be as much yours as it is ours. Tell us what you want to read.
writetous@idronline.org
ABOUT THE AUTHORS 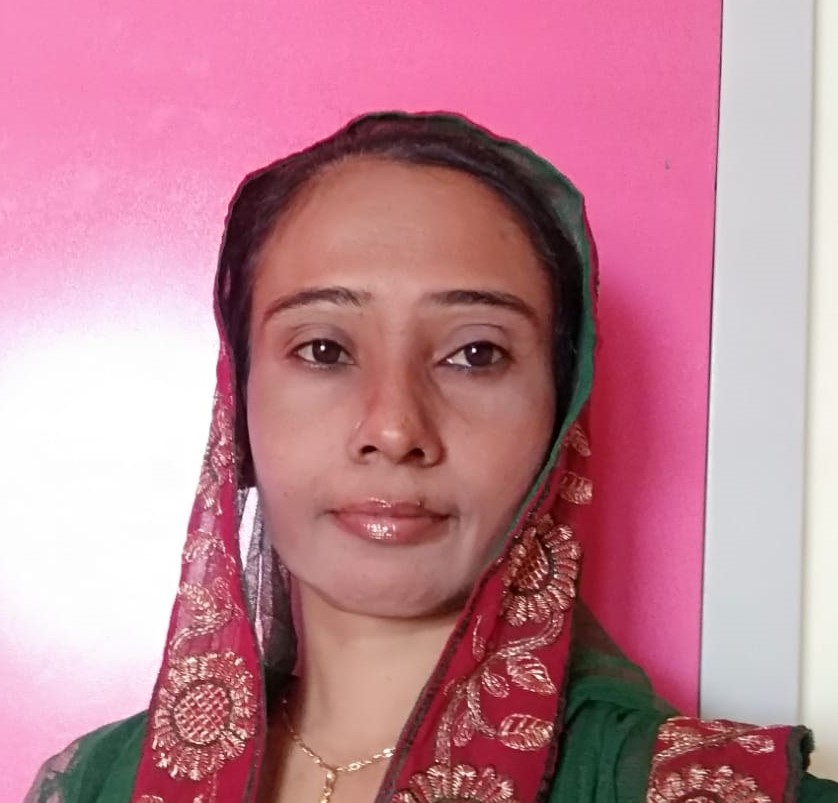 Khataben Sameja is part of the Kutch Mahila Vikas Sangathan (KMVS), and works as a paralegal, along with training and managing new cadres of paralegals. She has helped more than 1,000 women come out of violence, and is a leader for the communities she works with and the paralegals she manages.