The correlation between midday meals and learning outcomes

A study examined the effects of midday meal schemes on learning outcomes to find a steady increase in test scores initially, after which the effects 'taper off'.

Academics from the Indian Institute of Management, Calcutta, and the European School of Management and Technology, Berlin, correlated the number of months children had school meals with their performances in standardised reading and mathematics tests–and noticed significant improvement.

Studying the test scores of around 12.3 lakh primary school children, the economists Tanika Chakraborty and Rajshri Jayaraman found the average reading score was 18% higher for children who ate school lunches for three to four years than those who had them for less than a year. In maths, children with access to the programme scored 9% higher.

The programme was not introduced in all states at once. Tamil Nadu and Gujarat have had school meal schemes since the 1980s. In 1995, the Union government launched a nutrition support programme in around 2,400 blocks which was extended to all blocks over the next two years. It was a November 2001 Supreme Court ruling that gave the midday meal scheme its current shape. The top court directed all states to provide hot cooked meals containing a minimum of 300 calories and 8-12 grams of protein in all government and government-funded primary schools. However, some states took until 2006 to implement it. For this study, the economists considered only the states that implemented the scheme after 2001.

Their study, School Feeding and Learning Achievement: Evidence from India’s Midday Meal Program, has been accepted for publication in 2019 by the Journal of Development Economics.

For their analysis, the economists used scores in tests conducted by the education non-profit Pratham for its Annual Status of Education reports, or ASER. The first round of tests was conducted in 2005, after the Supreme Court order. The study analysed scores of tests done from 2005 to 2012.

Children aged five to 16 were tested for the annual reports but for their analysis the economists used data for children aged 6 to 10–the ages corresponding to Classes 1 to 5. They analysed the scores of 12,38,781 children in 24 states and Union Territories. Of them, 97% were enrolled in school and, therefore, had access to midday meals. The sample included scores of children who were born before the Supreme Court’s order or had spent several years in primary school but without getting meals because of the programme’s staggered implementation. 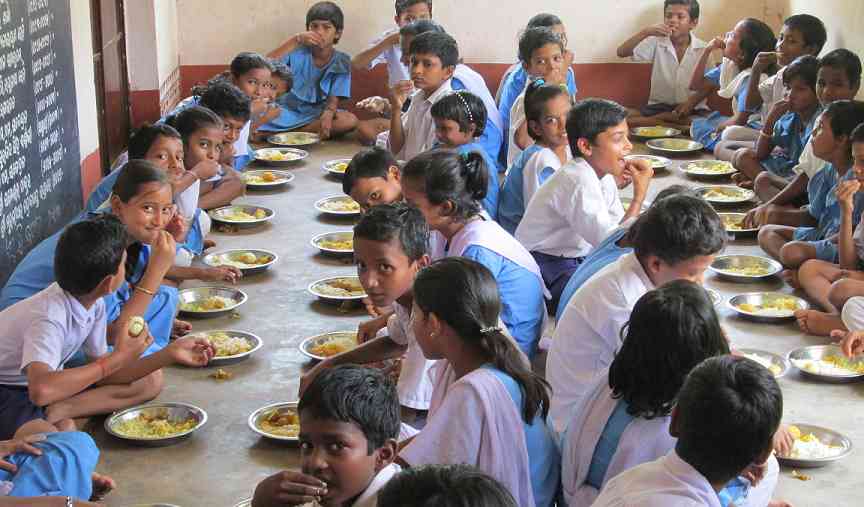 Once implemented universally, access to the programme naturally increases with the number of years in school–a Class 5 student has had more school meals than a child in Class 1.

Similarly, performance on the ASER tool improves with the number of years. The tool is a standard test administered to all children, irrespective of the class they are in, to determine the levels of their reading and maths proficiency. For example, a student scoring 1 on the reading test can do no more than identify letters of the alphabet. A child scoring 4 can comfortably read a short story considered suitable for Class 2. A child who just recognises single digits similarly scores 1 in maths. They get 4 if they comfortably divide a three-digit number by a single-digit one.

The average reading score was 18% higher for children who ate school lunches for three to four years than those who had them for less than a year.

Primary schoolchildren who underwent the eight rounds of ASER’s testing from 2005 to 2012 had an average age of 8.18, scored 2.09 in reading and 1.95 in maths and had eaten midday meals for an average of 26.49 months. Considering the month and year of the scheme’s implementation in a particular state, the academic calendar, ASER’s testing schedule and their age at the time of testing, children in the sample would have had access to the meals for anywhere between four months and 52 months.

Related article: “Let us not give up on government schools”

This is not the first study to examine the impact of free school meals on learning. It is, however, the first to correlate test scores with “exposure” to meals over five years. And in the long-term, “programme exposure is positively correlated with learning”, the economists found.

Children who have had just four months of school meals “have an extremely low average reading and math test scores of about 1.07”, the economists found. “From this baseline, average test scores increase steadily by about 0.035 points for reading and 0.030 points for math with each additional month of exposure.” Children with the maximum time in the scheme–52 months–score three times higher than the four-month baseline.

Chakraborty and Jayaraman, though, conceded an “upward bias” in their estimate “since it captures differences across time, cohorts, or states”. “Children surveyed in later years, belonging to older cohorts, and residing in states which implemented the policy earlier are likely to have both longer exposure and higher test scores,” they explained.They also noted that states which implemented the programme early, around 2002-’03, were likely to have school systems that are more efficient in general.

For children in their second year of midday meals, reading test scores improve 4.4% over the baseline and in the third year, by 15%. There is slight increase in the fourth year as well. By the fifth year, however, the “effect tapers off” with scores showing a small drop in performance from the previous year.

Maths scores over five years follow the same pattern, with a significant improvement only after two years. “Relative to the (up to) one-year baseline, the increase in test scores is small in magnitude and in the case of math, statistically insignificant, after up to two years of exposure,” the study found. “Thereafter, it is large and significantly higher. This is important in view of the negligible learning effects of school feeding programs documented in the literature to date…The extant literature has–without exception–examined program effects after at most two years of exposure. Our results suggest that students may need prolonged exposure in order to read substantive learning benefits from the programme.”

The programme improves the impact of certain other schooling inputs and resources as well. A 10% increase in teacher attendance alone can be linked to a 0.006-point increase in reading scores. But when an increase in teacher attendance is combined with “one additional year” of school lunches, both reading and maths scores show a more substantial improvement. Presence of blackboards have negligible impact but “when combined with midday meals they improve both reading and maths test performance”, the study found.

This was originally published on Scroll.in. You can read it here.