The most accurate data on FCRA today

This report makes sense of, and simplifies the publicly available numbers and trends in FCRA.

In year 2015-16, foreign donations worth INR 17,620 crore were made to 23,802 nonprofits in India. This figure was 16 percent higher than the previous year’s figure. In the same year however, some 10,000 FCRA registrations held by nonprofits were cancelled by the government.

FCRA refers to the Foreign Contributions (Regulation) Act, a law in the Indian Constitution that looks at the inflow of philanthropic money from foreign contributors, specifically to nonprofits in India1.

In recent years, FCRA has become an important part of the public discourse, and foreign donations have been getting an increasing amount of attention from both the media and the government. Despite this, there have been instances where conflicting data points have been quoted by various entities.

To address this problem of inconsistent and inaccurate data, the Centre for Social Impact and Philanthropy (CSIP) at Ashoka University commissioned research that uses a quantitative approach, and analyses publicly available data on financial flows into the sector. Here are some highlights from their report with respect to foreign funding to the sector.

The compilation of individual nonprofit data scraped from the government of India’s FCRA database in the CSIP report showed the 2015-16 figure to be close to the government’s figure. However, the government’s 2016-17 stated figure was 56 percent lower than that highlighted in the report. 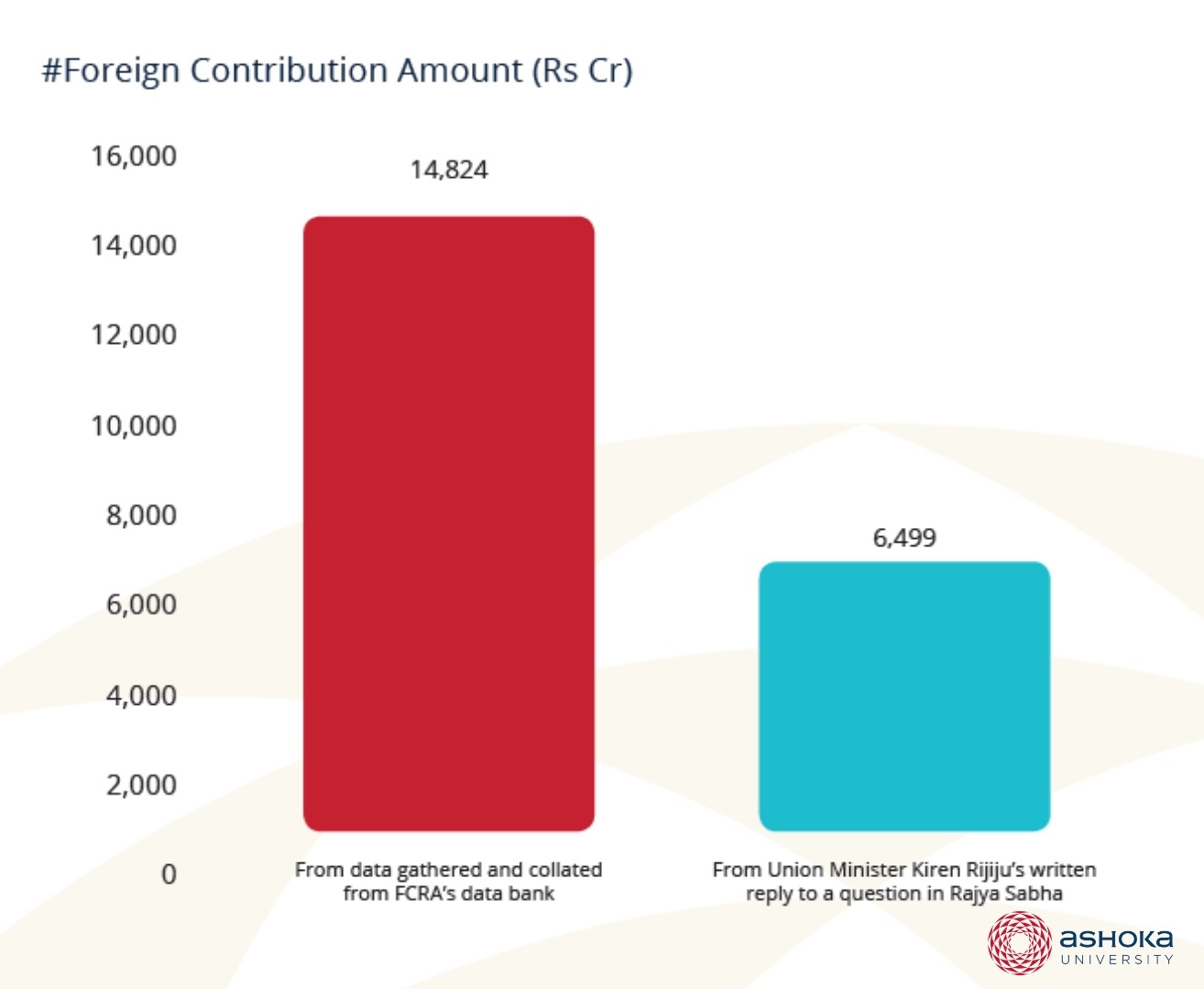 In December 2017, Kiren Rijiju had said that registration of 18,868 nonprofits had been cancelled during the period 2011 to 2017, for FCRA violations. The CSIP report shows three waves of cancellations of FCRA registration numbers in the period, the main stated reason being failure to file annual FCRA returns. 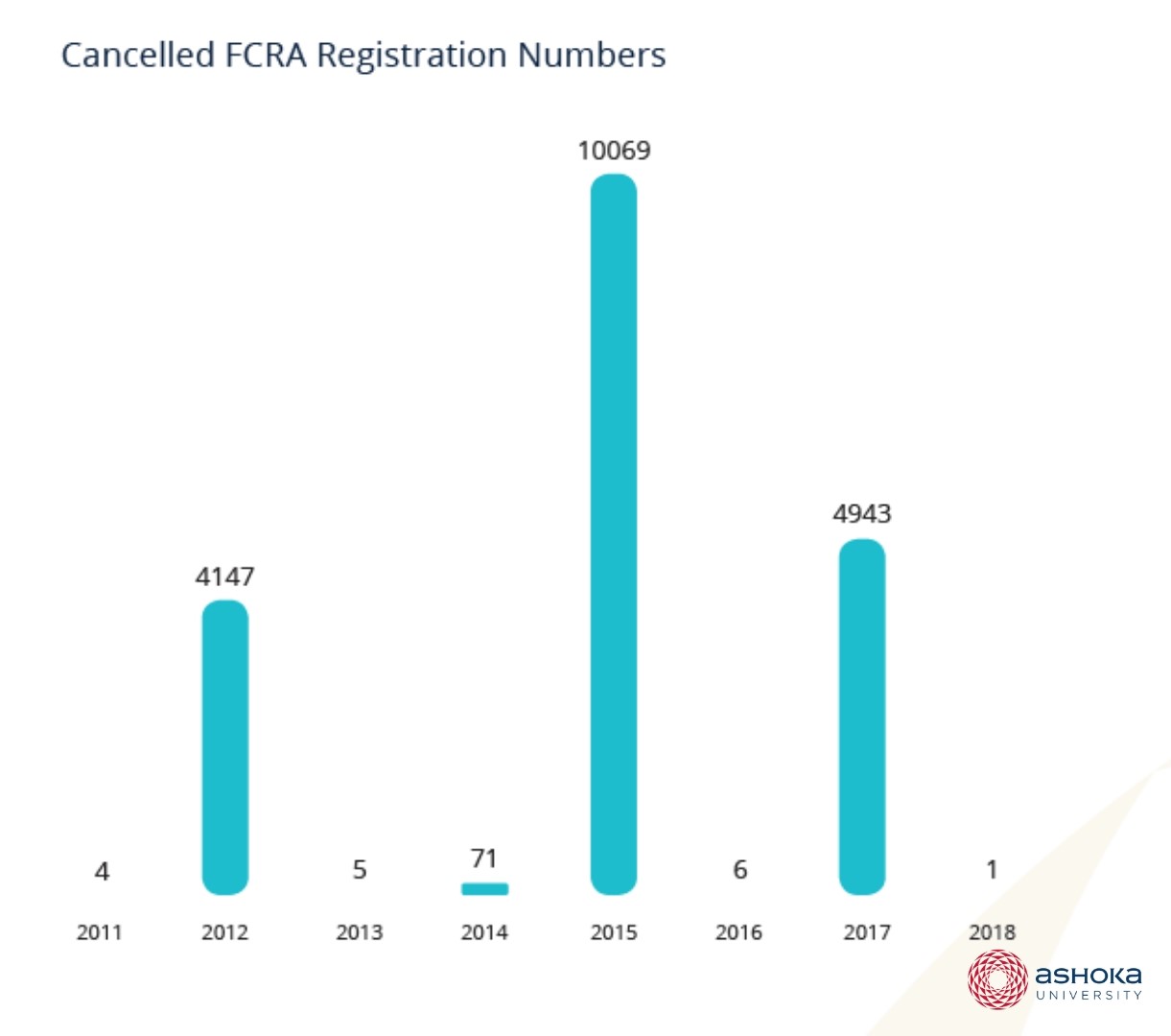 The FCRA registrations that were cancelled mostly pertained to duplicates.

Many of these ‘duplicate’ registration number had been inactive, and a significant part of the cancellation spree has been of these. Therefore, when we say that ‘x’ number of registrations have been cancelled, it does not mean that ‘x’ nonprofits are now unable to receive foreign donations.

According to another data set in the FCRA data bank, between 2010-11 and 2015-16, there were 13,068 FCRA registration numbers for which nonprofits had not filed annual FCRA returns. This matches the volume of FCRA cancellations seen during this period, and supports the reading that the en masse cancellations are primarily a result of the weeding out of multiple registration numbers. 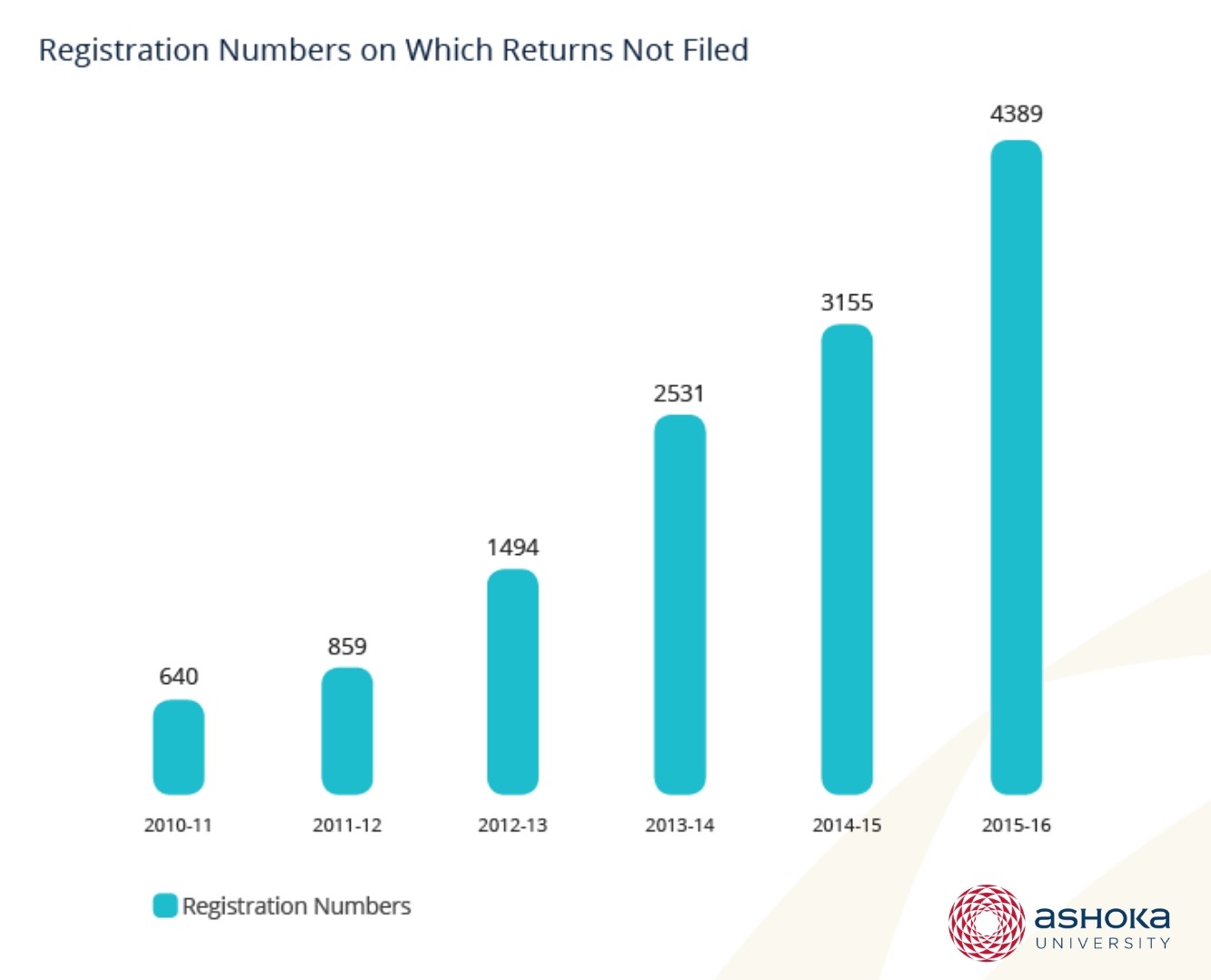 Five states accounted for nearly half the foreign donations received 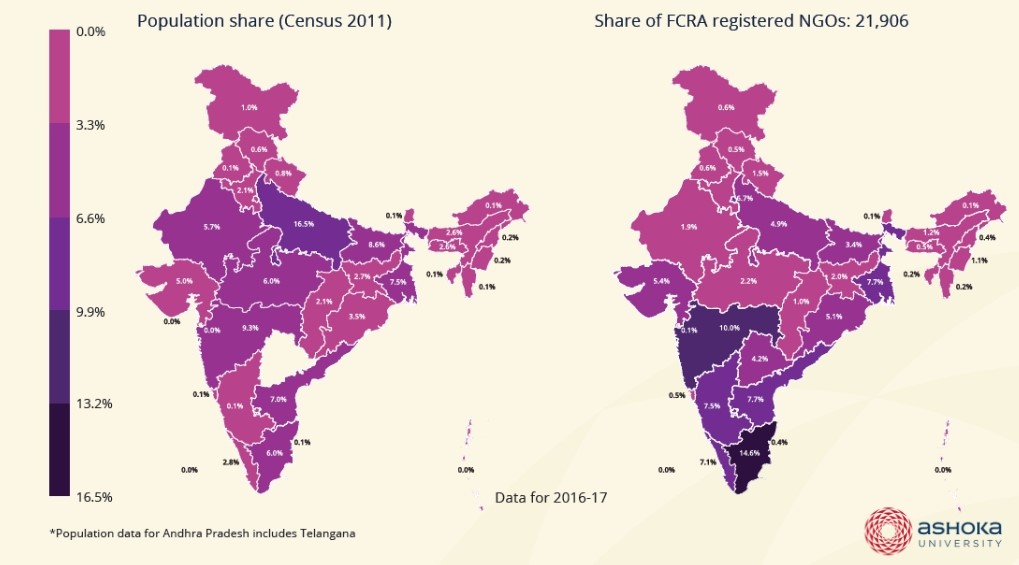 For each of these states, the share of FCRA-registered nonprofits is higher than their share of population. 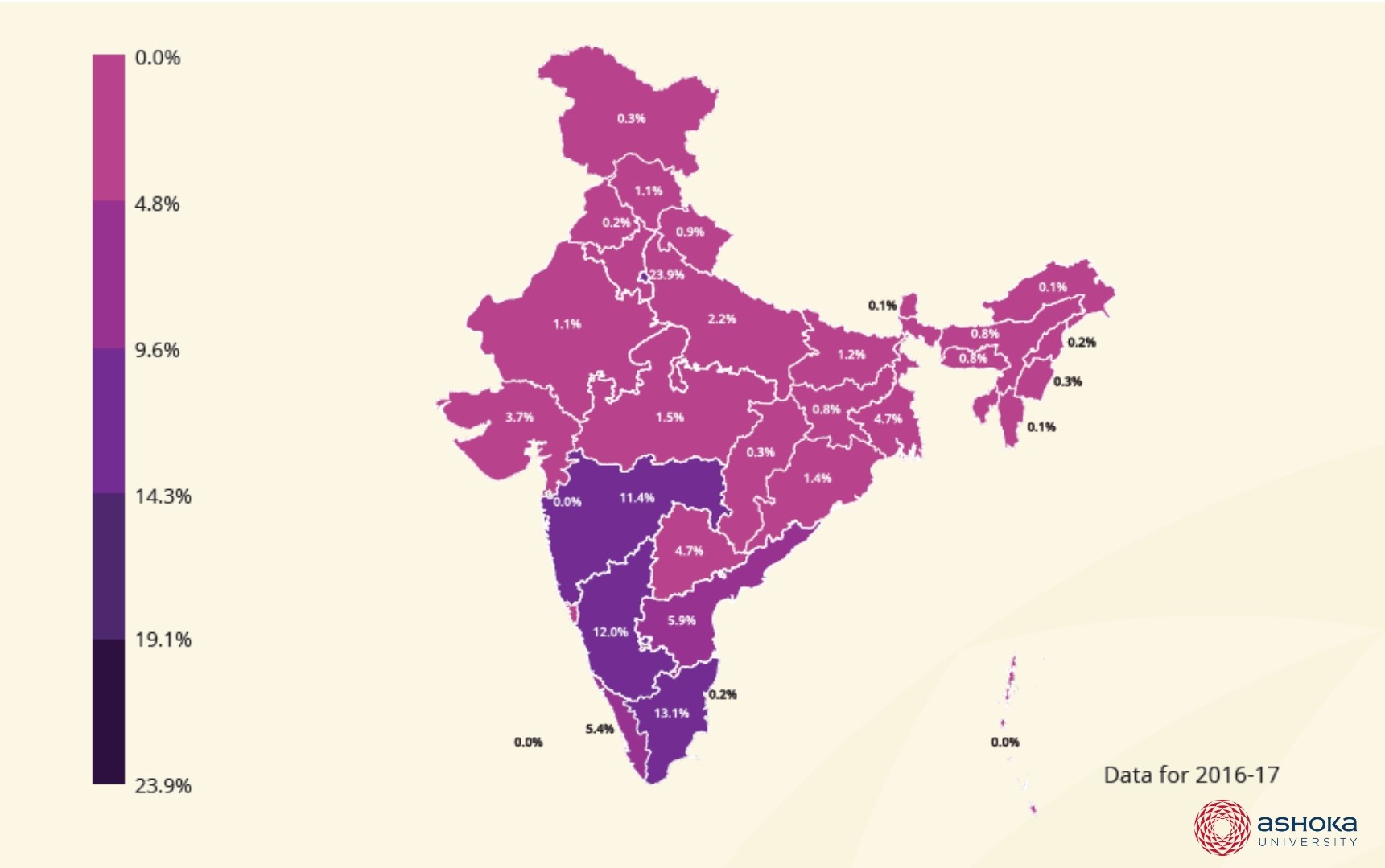 If we look at the share of foreign donations received in terms of cities/districts, India’s five big metropolitan cities received the highest share in the last eight years. 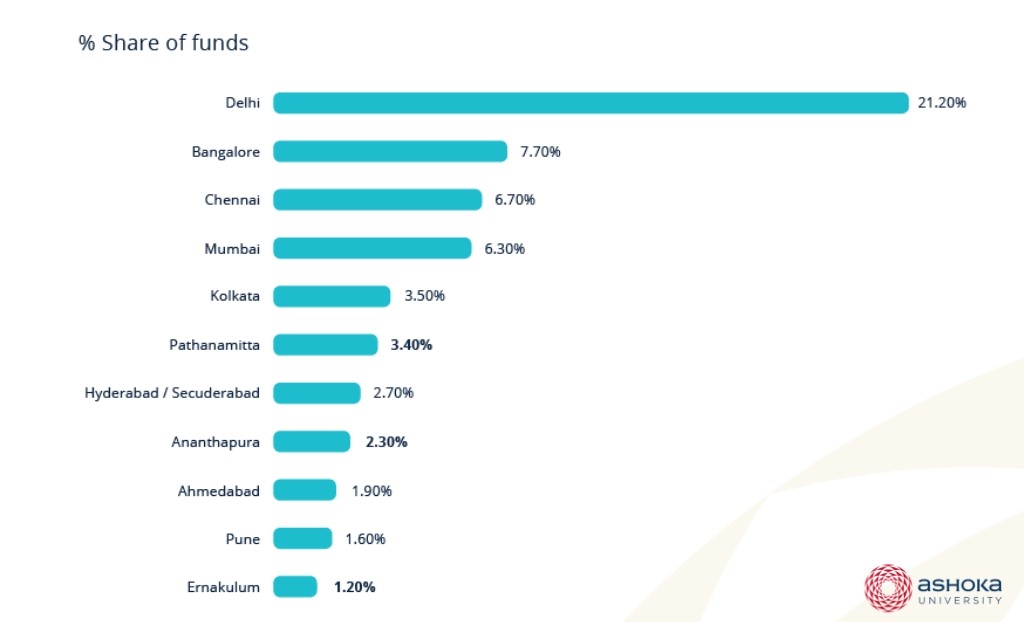 What seems counter-intuitive is that among the top 11 cities/districts, there are three—Pathanamthitta, Ananthapur, Ernakulam—that lead in neither population nor economic activity.

A few nonprofits received a disproportionately large amount of donations 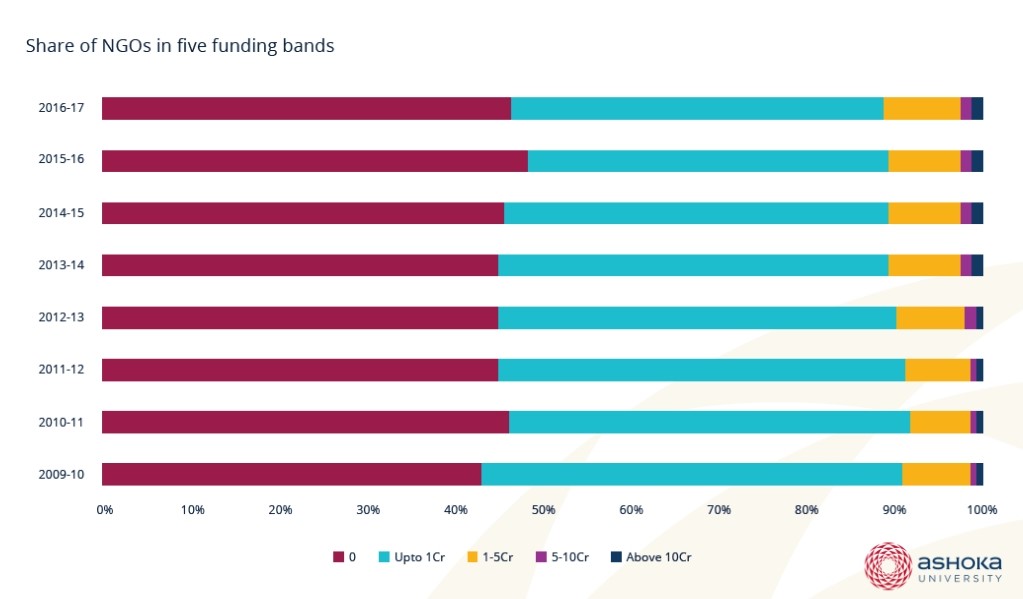 On average, 45 percent of the FCRA-registered nonprofits did not receive any foreign donations. Related article: Nonprofit flow chart | Will I get my FCRA licence?

While the Government has made an effort in recent years to improve transparency in the sector by making some data publicly available, focused efforts need to be made to improve the quality of data that is collected, stored, and managed by the Government. One way to do this is by introducing a common identifier such as a PAN Number. A unique identifier across data sets will enable collation and comparison, and make analysis more meaningful.

Availability of more accurate data on FCRA and foreign philanthropy will ensure that the discourse around it is more informed and strategic, and that all the stakeholders have a better understanding of the sector.

Tags: FCRA
We want IDR to be as much yours as it is ours. Tell us what you want to read.
[email protected]
ABOUT THE AUTHORS