A day in the life of: A community health worker

In rural Rajasthan, community health workers are taking on new roles—dispelling myths around the pandemic and allaying fears that come with the lockdown.

I live in Matasula, a village in Udaipur district, Rajasthan. I work with Basic Healthcare Services (BHS), as a health worker, to create awareness about health and nutrition among women from the local communities. I’ve been with BHS since 2014 and have been posted at the Manpur clinic for the last eight months.

Apart from me, the sister (nurse), bhaiya (a male community health worker who interacts more closely with men), baiji (cleaner), and another senior health worker are also employed at the clinic. Before COVID-19 struck, I would usually head out into the field at the start of each day, but now because of the lockdown, we visit the field less.

Nowadays, we spend more time at the clinic, helping the sister. We ask patients for their travel histories, whether anyone from their home or village has returned from elsewhere, and what the situation is like at home. Before the lockdown, the sister and senior health worker would conduct ante-natal care and post-natal care in the field. They would give these women iron and calcium supplements, and conduct counselling sessions. None of that can happen now. We speak with some mothers over the phone, and advise them on what pills and precautions they may need to take, but we cannot hold group sessions and reach as many women as we did before.

I am also a phulwari1 supervisor, but now that the phulwari is closed, we cannot do much of the work we did earlier, such as weighing children and identifying malnourished children. However, we still prepare and organise food from the phulwari, parcel it, and our volunteers go door-to-door delivering the food to the children. Even though parent meetings have stopped, we continue to check up on parents. | Picture courtesy: Sajju Meena

And even though parent meetings have stopped, we continue to check up on parents and make sure they are following practices such as washing their children’s hands and other cleanliness and hygiene instructions, along with what to feed their growing children. They’re often occupied with housework, and don’t always remember some of these instructions, so we remind them.

9.30 AM: My husband drops me off to the clinic—I would travel by bus, earlier. There is a patient at the clinic, so we start by taking her history and asking her some questions. Since we have also been helping people out with rations, I begin to ask her questions about her household. She immediately becomes nervous and starts refusing to answer my questions. “I have small children at home,” she says, worried that we might take her away.

There haven’t been any cases at our clinic so far, but there have been reports of cases in other places. People with coughs, colds, and fevers get particularly anxious. We ask them not to worry too much, and give them more information about the illness. We tell them to quarantine themselves if they experience any symptoms.

I reassure the woman that we will not send her anywhere and calm her down. I explain that I am only trying to help her out with medicines and rations.

Many of our patients are in Pratapgarh district. We have problems reaching them and are stopped by the police.

Since the lockdown began, our community-based volunteers have been helping us identify households that are in need of rations and medicines. Each household has different needs. We then send these lists to our team in Udaipur, who deliver the rations and medicines to our clinics, from where we take them to the villages and hamlets. Most medicines are for TB patients. They usually come to the clinic themselves, but because of the lockdown, we have been going to their houses to deliver their medication, usually for 15 days at a time.

We have permission from the government to travel across Udaipur and Dungarpur districts, but many of our patients are in Pratapgarh district. We have problems reaching them and are stopped by the police.

12.30 PM: Since COVID-19 has struck, we spend time counselling people and spreading awareness. We explain that the illness can spread through interaction with people who have returned to the village from outside, and ask them not to hug anybody or shake hands.

Initially, people didn’t listen to us. “Kaha se yeh aaphat phailayi hai? Netao ne yeh aaphat phailayi hai,” (From where have these troubles spread? The politicians have spread it.) some people say. While some believe that politicans have caused the crisis, others believe that a goddess, Mataji has manifested in the form of this illness. They believe that if clean water is poured on her idol to keep her cool, the virus will be controlled. We emphasise that they can continue to do this, that belief in Mataji need not be compromised on, but explain that she has not caused the virus. We use malaria as an example to explain what corona is and how it spreads. They know that malaria spreads when water collects, allowing mosquitoes to breed. Similarly, we explain to people how this virus spreads.

Related article: A day in the life of—A district coordinator

2.30 PM: We make a trip to a phulwari to deliver sattu atta—a nutritious mixture of ground cereals and pulses. The police had stopped us on our way to this phulwari once before, so we decide to try another route. The second route that we try is blocked with stones and sticks. We try a third route, but even that is blocked. Eventually we find a road that is open.

People are hearing about the spread of the disease and don’t want outsiders to enter their villages, so they block the roads with stones and sticks. Some fear that since we are coming from the clinic, we may be bringing the disease with us, but we don’t go close to community members, and speak to them from a distance.

The issues with transport has also affected work under the Mahatma Gandhi National Rural Employment Guarantee Act (NREGA). We’re trying to find out whether people can access this work—the orders have come from above, but they are stuck at the panchayat. But since people cannot go outside and there is no transport, we are trying to see how NREGA work can take place.

5.30 PM: I call up my husband who comes to pick me up, and we travel back home to Matasula.

Tags: anganwadi, coronavirus, healthcare, nrega
We want IDR to be as much yours as it is ours. Tell us what you want to read.
writetous@idronline.org
ABOUT THE AUTHORS Sajju Meena is a tribal woman who grew up in a small village around 100 kilometres outside of Udaipur. She started her journey in community mobilisation for health and nutrition as a village volunteer 12 years ago. Today, Sajju supports 50 such volunteers, as well as ten daycare centres (phulwaris) spread across hard-to-reach areas in rural Udaipur. She has supported and guided close to 1,500 pregnancies, helped around 500 women access contraception, and has worked to improve nutrition among nearly 1,000 children. 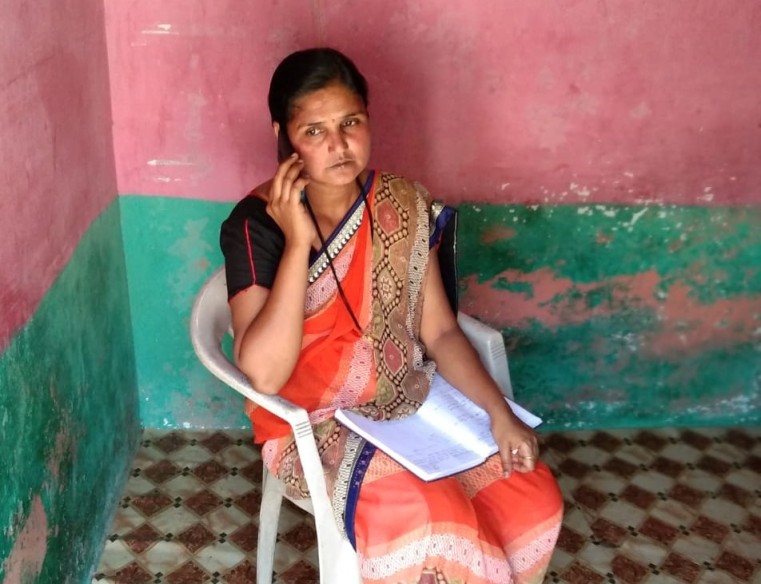 Gender
A day in the life of: A grassroots leader
Forced to stay indoors due to the lockdown, a mahila mandal network in Marathwada, Maharashtra has embraced remote working and conference calls, to help their communities cope with the COVID-19 pandemic.
by Lakshmi Waghmare | 5 min read