Gaps in the government’s plan to help unorganised workers

Barriers to accessing the e-Shram portal must be addressed to ensure that workers in the unorganised sector can claim benefits.

The Government of India launched the e-Shram portal with the mandate of registering 38 crore unorganised workers in the country. The portal aims to bridge the gap in unorganised workers’ ability to access social welfare and employment benefits by issuing an e-Shram card (or Shramik card) upon registration. This card assigns each worker a unique 12-digit number, which enables access to social security and employment benefits. The government also plans to use the data collected via the portal to create India’s first Aadhaar-seeded National Database of Unorganized Workers (NDUW).

At its core, this one-of-a-kind initiative is a welcome change as it will systematically bring unorganised workers under one umbrella. By expanding the scope of defining the term ‘worker’, it enables the inclusion of erstwhile excluded categories of domestic and migrant workers. The portal offers both online and offline registration routes. However, as described below, failed attempts by workers to access the digital portal draws attention to the importance of strengthening non-digital infrastructure. This will improve access and effectiveness of digital interventions for the poor and marginalised unorganised workforce, whose reality is marred by a stark digital divide.

Moreover, insights from workers attempting to access and register on the portal highlight the need for proactive and effective collaboration between employers, workers collectives, and civil society organisations (CSOs). This will help the portal deliver to its target beneficiaries.

Attempts to register three migrant domestic workers working in New Delhi—two from West Bengal (Amira and Nur) and one from Madhya Pradesh (Rita Devi)—shed light on the barriers in access, awareness, and ability to claim to benefits that many erstwhile excluded groups face. The first attempt to digitally register Amira failed as she could not access the e-Shram portal using her keypad handset that had no internet. Nur was next—she was unable to access the website as the page was incompatible with her 2G internet connection and handset. And Rita, who did not have a mobile phone, relied on her employer to return her family’s calls.

We then tried using a desktop interface for registration. Amira was unable to register as her phone number did not match the mobile number linked to her Aadhaar. “In the migration to Delhi by train, I lost the registered number that my husband and I used… as a domestic worker, I had never used that number or Aadhaar to get any employment benefits… I didn’t know such benefits existed.” Since Amira had not previously accessed employment welfare benefits which required mobile–Aadhaar authentication, she was unaware of the need to update her mobile number over the years. Through the process of trying to register her using Aadhaar, what Amira was most sceptical about was the misuse of her Aadhaar on an online portal that she did not have information about. She said, “This won’t take away my family’s PDS entitlements back in Bengal, right?”

Findings from previous reports show that migrant workers’ precarity is reinforced due to the challenges they face during the process of updating their Aadhaar.

For Nur and Rita, online registration on the portal failed because their Aadhaar was not attached to a mobile number. As the online e-Shram portal requires a mobile number-Aadhaar authentication, the workers were unable to use the digital intervention to their advantage.

In all three cases, failure to register online highlighted the need for workers to rely on common service centres (CSCs) and kiosks for assistance to register online and get their Aadhaar linked, thus depending on non-digital infrastructure to claim digital welfare benefits. This is in tandem with findings from previous reports, which showcase that migrant workers’ precarity is reinforced due to the challenges they face during the process of updating their Aadhaar. Discussions with the team from Chalo Network, a financial inclusion initiative tell us that migrant workers face barriers firstly due to the limited awareness about the process, and secondly due to the time and financial cost involved. This was especially noted during the pandemic when workers faced limited access to welfare due to issues in updating Aadhaar, which made them rely on non-digital infrastructure and intermediaries for support.

Creating an inclusive and conducive ecosystem for e-Shram beneficiaries

As the government takes steps towards building India’s Aadhaar-seeded NDUW and ease unorganised workers’ access to welfare benefits, few gaps remain to be filled. Filling these gaps is essential to effectively incorporating India’s 90 percent informal workforce that has so far remained on the margin of employment-related welfare benefits. The government and welfare ecosystem need to address the bottlenecks which impinge on workers’ ability to effectively use the infrastructure to claim these benefits. Some key areas to be considered are:

Unorganised workers account for 92 percent of India’s workforce. In India, only 4.4 percent rural and 42 percent urban households have access to the internet, which is further skewed due to gender and regional disparity.

In this digitally unequal landscape, the hope for an organic digital uptake of e-Shram seems a distant dream. However, the use of existing non-digital welfare infrastructure—welfare boards, fair price shops (FPS), CSC agents, and CSOs—which are present at the grassroots and have been working with unorganised workers might propel a speedy and effective uptake.

Historically, many unorganised workers have remained outside the scope of employment-related benefits by the state. Noting their first-time inclusion, there is a need to create awareness and trust among the beneficiaries and the employment ecosystem about the advantages of registering on the portal. As informality remains a feature of not merely state-worker relations but also worker-employer relations, it is important to reinforce trust among workers and their employers about the merits that the initiative holds. Here, grounded awareness campaigns with the use of multilingual posters and voice-based awareness initiatives will encourage registration uptake, especially among migrants, women, and adolescents workers, who presently remain marginalised due to literacy and language constraints.

Effective digital intervention for unorganised workers needs to be supported by a strengthened non-digital infrastructure. To create impact at scale, the government should invest in the training and capacity building of non-digital infrastructure, including CSC and kiosks, which will be the first step for workers to use the portal effectively. Additionally, the existing network of last-mile delivery agents from other government interventions such as Mahatma Gandhi National Rural Employment Guarantee Act (MGNREGA), Integrated Child Development Services (ICDS), and Public Distribution System (PDS), among others, can be capitalised to create awareness and reach beneficiaries.

4. Avoiding workers’ self-selection out of the benefits

The e-Shram portal extends social welfare benefits to categories such as domestic and migrant workers, who so far have been excluded from the welfare infrastructure. It calls for special attention to be given to promote awareness about entitlements among workers whose labour has been excluded both in the policy and societal realm. Accounting for the historical gendered exclusion of women’s domestic work in the realm of policy, a majority of domestic workers remain unaware of their rights and the entitlements they are eligible for. This is worse when workers are migrants in destination states where they have limited bargaining power vis-a-vis their employers. In this context, a proactive awareness campaign will help avoid workers’ self-exclusion and promote equitable inclusion as beneficiaries.

5. Integrating employers and CSOs as stakeholders

Lastly, noting the informal relation between employers and employees in the unorganised sector, it is critical to work with CSOs, employers, and intermediaries such as thekedars and contractors to enable an ecosystem that focuses on benefits to workers. Nudging employers to encourage registration may potentially benefit the uptake, along with creating more awareness about the entitlements that unorganised workers can benefit from, without any penalty to employers. In particular, CSO integration with e-Shram can be seen in two ways. First, by enabling workers access through non-governmental volunteer-based registration in their existing programmes. Second, by partnering with CSOs for effective delivery of benefits, similar to previous attempts in the health and education domains. Effective grassroots integration can provide a pathbreaking space for collaboration and strengthening of the welfare ecosystem for unorganised workers.

Tags: digital inclusion, government scheme, informal sector, migrant workers, social welfare
We want IDR to be as much yours as it is ours. Tell us what you want to read.
[email protected]
ABOUT THE AUTHORS 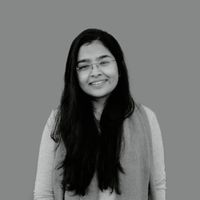 Harshita Sinha is a PhD candidate at the London School of Economics. She is also a migration fellow with India Migration Now and Bandhu Urban Tech. Harshita holds an MRes and an MSc in International Development from the London School of Economics. Her work looks at the intersection of citizenship, social protection, and informal labour regimes in urban destination states. She has recently curated Voices of Informality, a knowledge platform highlighting grassroots stories on informality for practice-based action. 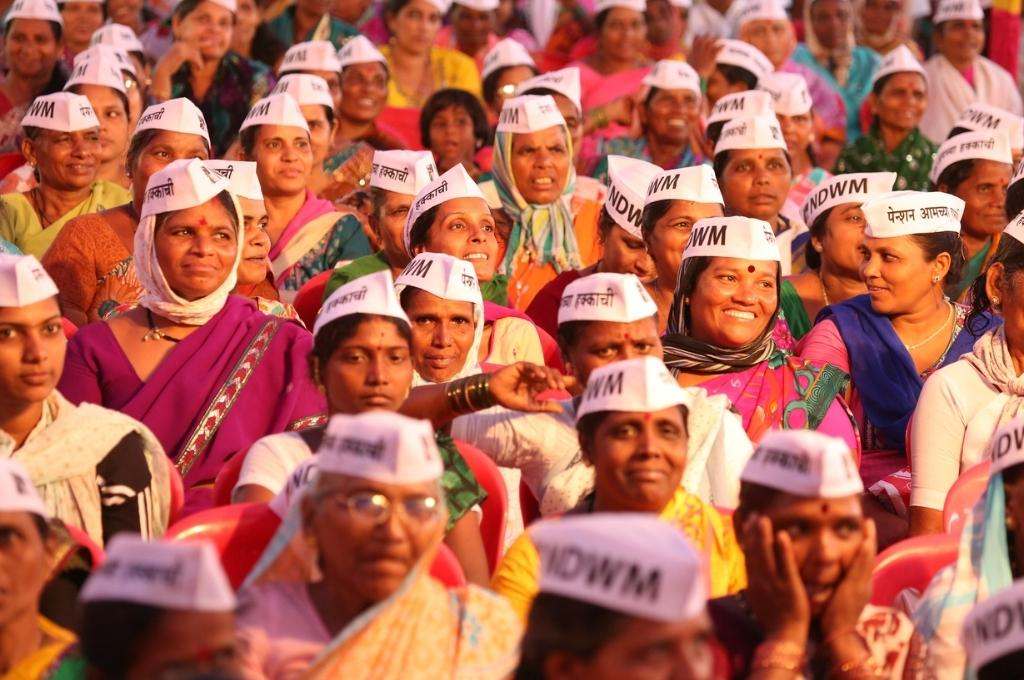 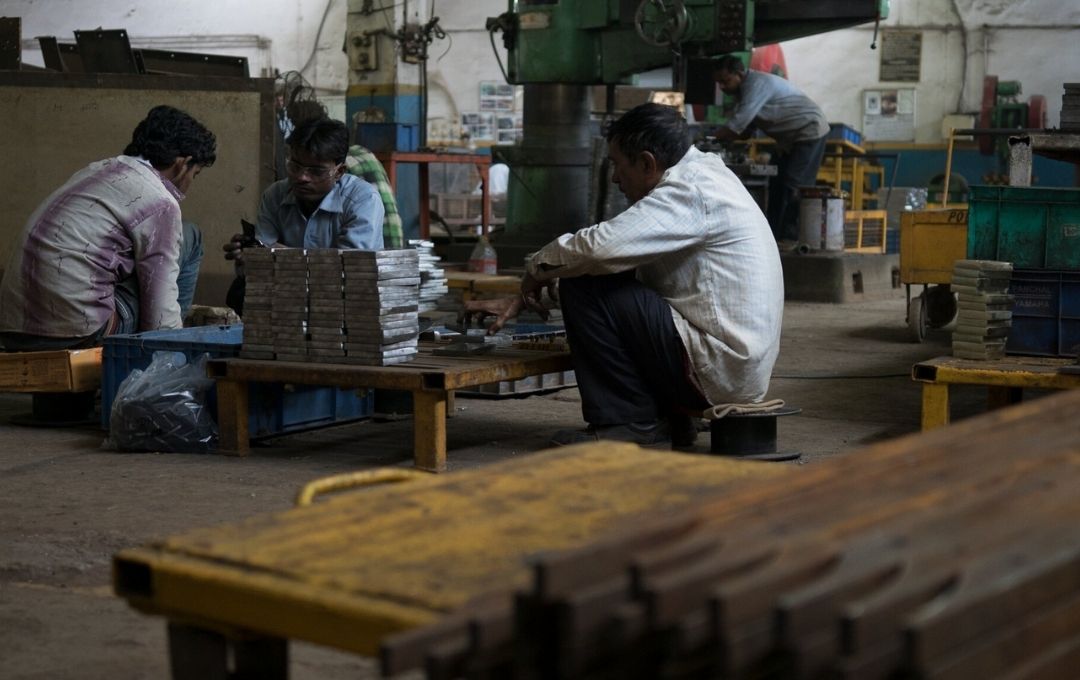 Rights
Labour rights have worsened post-lockdown
The work crunch due to COVID-19 has put pressure on labour rights, with workers having to do as their companies demand, or lose their jobs.
by Aaditeshwar Seth | 7 min read