The devil is in the details

The National Education Policy 2020 could transform early childhood education, if it is implemented effectively.

It is after almost 34 years that the central government approved the new National Education Policy 2020 on July 29, 2020. This document contains comments on the entire education system and its various recommendations are being heavily debated. Some believe it to be a revolutionary policy, while others see it as a step towards the dilution of children’s fundamental right to education. Many educators and practitioners in the field of Early Childhood Education (ECE) have welcomed this policy because it prominently mentions ECE, which has remained a relatively neglected field in previous policy documents. However, merely highlighting the importance of ECE in the document is not enough. Creating a well-thought-out plan for the universalisation of ECE and its effective implementation would require a dedicated public budget for it, and the policy is silent about this.

In rural areas, education in the anganwadis does not go beyond storytelling and teaching some songs and poems.

The term Early Childhood Education (also known as pre-primary or pre-school education) traditionally refers to the education of children aged three to six years. In India, the current condition of education for this age group lies at two extremes. In urban areas, pre-schools cover certain topics (such as letters from the alphabet and numbers upto 100) from the curricula of Grades 1 and 2. On the other hand, in rural areas, education in the anganwadis does not go beyond storytelling and teaching some songs and poems. In fact, as a society, we are unclear about what should be taught to this age group, and how it should be taught. This lack of clarity reflects in our pre-schools.

Historically, ECE in India has remained relatively neglected. This started with the Kothari Commission Report of 1965-66, and continued with the Right to Education Act of 2009, which did not recognise education as a fundamental right for children between three to six years.

In contrast, the NEP 2020 envisages a five-year foundational stage of education: Three years of ECE and the first two years of primary school. In other words, ECE is now supposed to extend from ages three to eight. An important point to note here is that the changes proposed in NEP 2020 are necessarily curricular in nature and not at the level of the physical facilities for ECE. The existing infrastructure of anganwadis, pre-primary sections attached to schools, and independent pre-school centres are expected to be strengthened for ECE and this can be done only if the government works out a clear roadmap. It also suggests that there should be continuity between the ECE curriculum and Grade 1 and 2 curricula. Though these proposed changes have a potential to transform early learning in India, a lot will depend on how we actually implement them.

The English saying, ‘the devil lies in the details’, implies that a seemingly easy task can become quite complicated once we get into the details. It is likely that a similar situation will present itself while implementing the recommendations of NEP 2020.

Closely connected with ECE, there is a section on the development of foundational literacy and numeracy in the policy. In this section, NEP 2020 recommends introducing three Rs (reading, writing, and arithmetic) into ECE. This is in spite of the fact that previous policies speak out against their inclusion. This, combined with the fact that the education department has been entrusted with curriculum development, has become a cause for worry among many people working in ECE. They think that the currently informal nature of ECE may give way to education that revolves around reading, writing, and arithmetic. 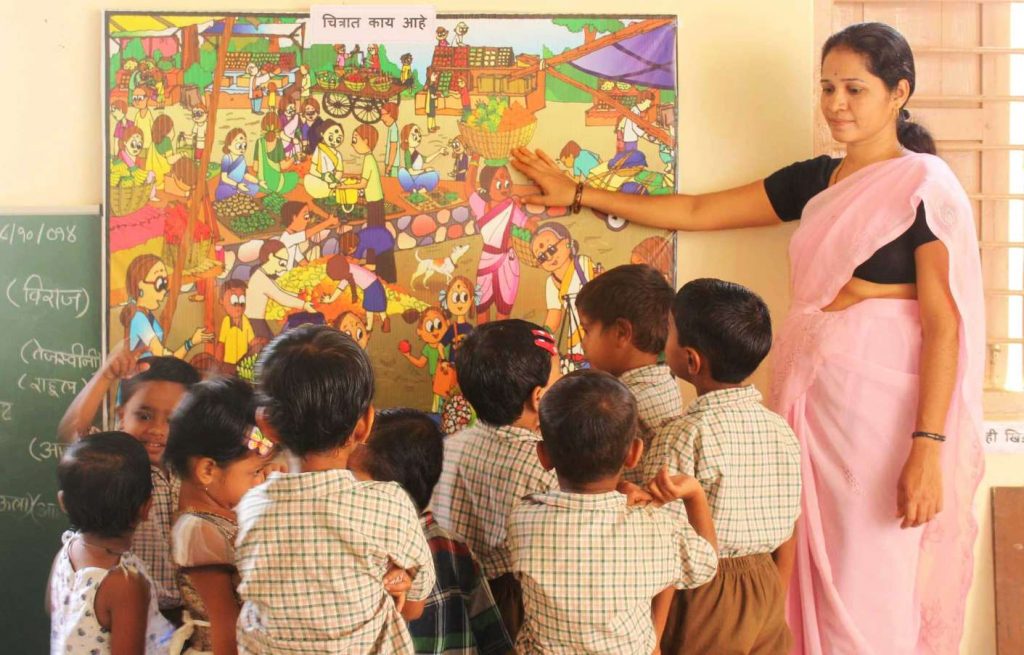 Though these proposed changes have a potential to transform early learning in India, a lot will depend on how we actually implement them. | Picture courtesy: Nilesh Nimkar

Why are the three Rs given so much importance?

One of the reasons why reading, writing, and arithmetic have been given so much importance in the NEP 2020 is most likely influenced by the following targets India has set under the Sustainable Development Goal 4, which pertains to quality education:

Given this, the focus on these areas in the NEP 2020 seems unavoidable. But the larger question here becomes: is it correct to stress on reading-writing-arithmetic at a very young age?

One of the factors that plays a role in the growing focus on early literacy is society’s perception of it (which does not necessarily align with theoretical evidence). In India, there is hardly any discussion or research about how to teach reading-writing to young children. One finds diverse beliefs about the concept of early literacy not only in the general public, but also among educators. Some prominent ones include:

All these beliefs reflect the traditional perspective on literacy education, which considers reading-writing as skills, albeit slightly complex ones. Therefore, the approach to teaching these skills involves breaking up each skill into small parts and learning them one by one. As a result, the classroom interaction revolves around tasks like repeated practice of standing and sleeping lines or curves as parts of letters or learning individual letters of the alphabet one by one. In pre-schools, it is common to see children practicing a letter or number through repeated copy-writing.

The primary objective of reading is meaning-making.

This approach ignores some salient aspects of reading and writing. The primary objective of reading is meaning-making. Through the construction of meaning, it is also expected that the reader should think critically about the thoughts and information expressed in the text. Both these aspects are completely neglected in the prevalent skill-based literacy instruction.

In the western world, an alternative approach to teaching literacy called the Emergent Literacy Approach was proposed in the 1960s. This approach considers literacy development as an integral part of children’s overall development. It proposes that children need to develop some critical ideas related to printed language and the process of reading and writing much before the formal introduction of the letters of the alphabet. Some of these ideas are as follows:

Researchers in the field argue that children from literate homes already have an understanding of some of these ideas, and they learn the remaining when they come to pre-school. However, children who come from homes which are not literate, such as first-generation school-goers, have to depend solely on the pre-school to learn these ideas. In such cases, the pre-school plays a very important role. Many techniques have been developed all over the world to teach these ideas to pre-schoolers. Any good quality literacy instruction programme cannot afford to miss these well-established insights.

Learnings from an ECE intervention

Quality Education Support Trust (QUEST), where I work, has been working in the field of ECE for the last few years. We have implemented a literacy programme based on the Emergent Literacy Approach in more than 1,700 anganwadis across Maharashtra. The data collected so far has shown extremely positive results. We tracked the achievement of anganwadi children during the intervention years and continued to track the same children even after they had moved to primary school; and compared the same with a control group. 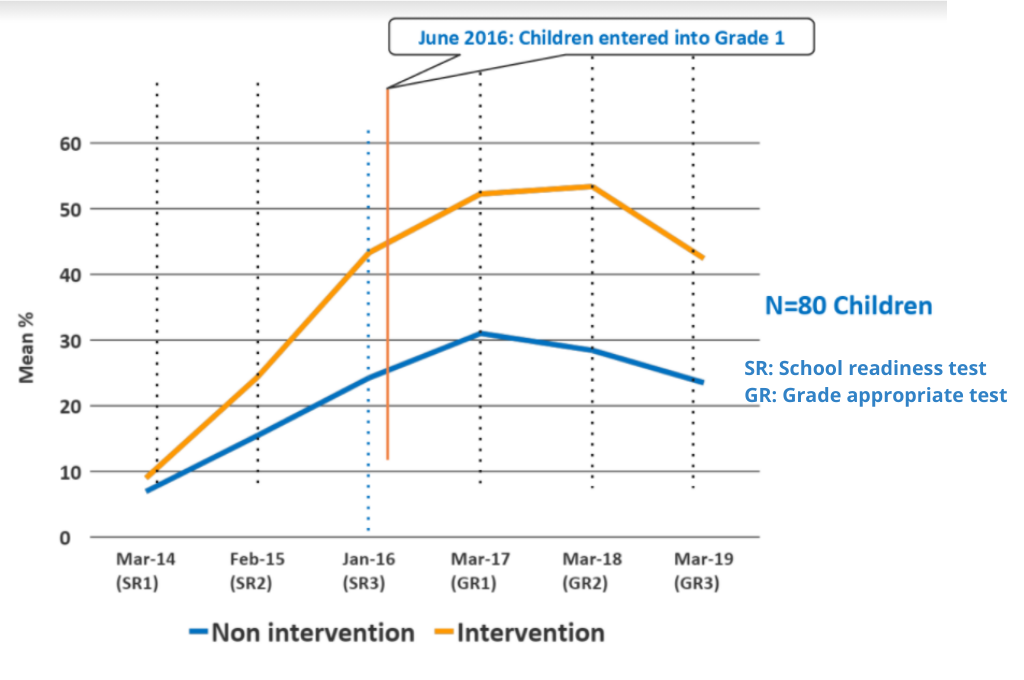 Early intervention has a long-term impact on children’s learning.

After three years of intervention we saw a significant difference of about 19 percentage points on school-readiness test between the control and intervention groups in 2016. This gap persisted even after the intervention ended and the children moved to primary school, when they were tested using a grade-appropriate test. The decline in the mean scores of both the groups in the year 2019 could probably be attributed to the weak inputs in the primary grades. This shows that early intervention has a long-term impact on children’s learning. However, it is necessary to continue this input in the primary grades. This aligns very well with the recommendation of NEP to consider the three years of pre-school and first two years of primary schools as one curricular stage.

The number 1,700 may sound very small if we consider the total number of anganwadis in Maharashtra (about 1,08,005), but it highlights the need for continuing the input from pre-school to the first two years of primary school. These types of insights from small-scale experiments need to be taken into account while evolving a large-scale implementation plan for the foundational stage proposed in NEP.

So how do we go ahead?

From this discussion, it is apparent that there is a huge difference between society’s perception of literacy education and the picture that emerges from the theoretical framework and from small-scale experiments. To make foundational literacy a success, it is critical to define early literacy in the light of the theoretical framework. The proposed ‘National Foundational Literacy and Numeracy Mission’ is expected to lay down such a framework. At this juncture, it is also necessary to have clarity and consensus on the objectives of foundational literacy. Further, it is important to recognise literacy as a means to understand and express thoughts.

It would be a welcome change to extend the informality of preschool to Grades 1 and 2.

Literacy development is a continuous process, and is an important aspect of children’s development. Without this understanding, it would be risky to bring together pre-school centres and early grades of primary school. To put it simply, it would be a welcome change to extend the informality of preschool to Grades 1 and 2. However, it would be detrimental for children if the prevalent skill-based literacy education and evaluation of primary schools is brought down to pre-schools.

To bring this change on a massive scale in a country like India, we need to not only provide appropriate inputs to teachers, but also to create awareness in the community at large. During implementation, if the prevalent popular perception of literacy is taken as a base—instead of the theoretical framework and the insights from empirical work—it is likely to prove harmful.

Tags: anganwadi, early childhood education, Government schools, NEP 2020, Right to Education
We want IDR to be as much yours as it is ours. Tell us what you want to read.
[email protected]
ABOUT THE AUTHORS 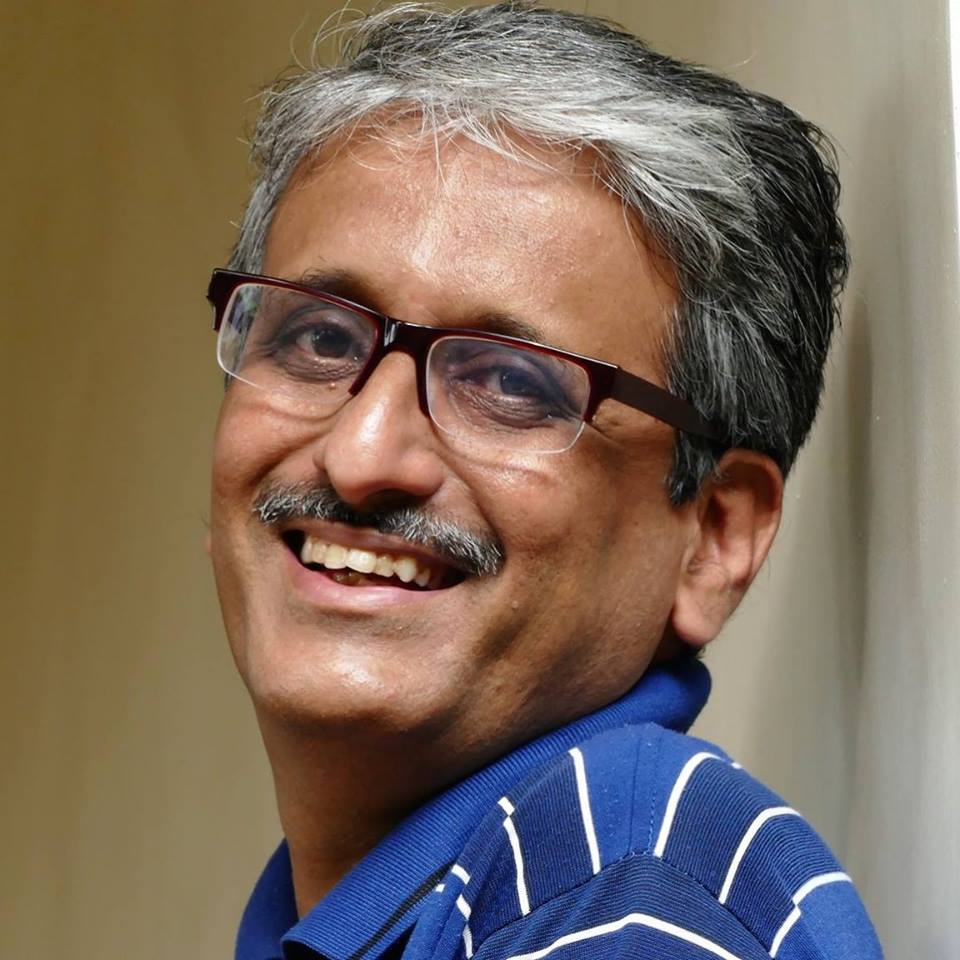 Nilesh Nimkar has over 20 years’ experience in the field of early childhood education, elementary education, teacher education and curriculum development. He has initiated several innovative programs for teachers and children, specially in the rural and tribal areas. He has received the Maharashtra Foundation Award for ‘Outstanding social work in the field of education’.