Why is there a collective silence around capacity building?

Nonprofits work on some of the most challenging social problems, and they need the right talent and tools, along with capital to cover their true costs.

Capacity building is one of those topics that many nonprofit leaders avoid bringing up with funders. They prefer instead to talk about their programmes and beneficiaries. That’s where their passion lies, and, not surprisingly, it’s where funders want to invest. However, not having the conversation around capacity building often means that nonprofits and funders risk neglecting to invest in it. Our own experience, along with a growing body of research, makes the case that nonprofits simply can’t achieve their full potential unless they invest and build the core capacity needed to deliver their programmes over the long term.

What does that mean on a practical basis?

Take, for instance, a nonprofit on a mission to establish rural health clinics across a district. To deliver a bundle of health services in remote areas, at scale, it will need a clear strategy to guide its work, build effective leadership, recruit staff, manage a finance department and fundraising team, and create and implement robust MIS and M&E systems. These are elements of core capacity that will support and advance the nonprofit’s delivery of health services. In their absence, the nonprofit will be severely limited in its scale, and possibly its impact. 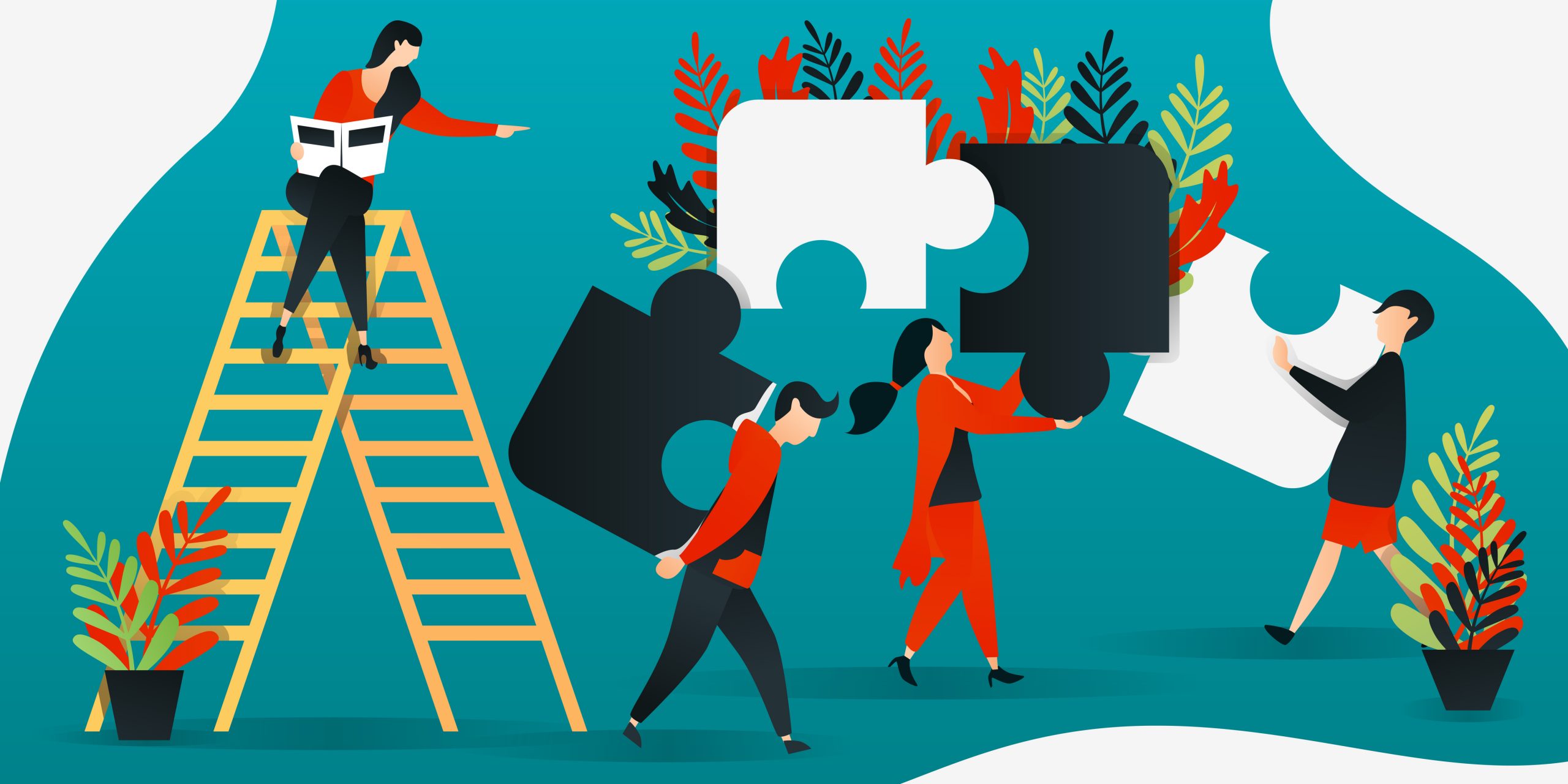 Not having the conversation around capacity building often means that nonprofits and funders risk neglecting to invest in it | Picture courtesy: Shutterstock

Yet in our experience, many nonprofits are not explicitly bringing up these issues with funders. For their part, funders often are not thinking in this way while partnering with nonprofits. This collective silence leads to a ‘starvation cycle’ that leaves nonprofits so hungry for core capacity that they struggle to achieve their full potential.

Capacity building in the business world is a foundational concept.

In contrast, capacity building in the business world is a foundational concept. Corporate investors expect companies to build strong central organisations, because they understand that their success depends on it. Nonprofits also need to build strong core capacity if they are to succeed. More so, if we aspire to solve big, vexatious social problems, we need to adequately equip nonprofits with good talent and tools, as well as capital to cover their true costs.

The problem with chronic underfunding

What personal experience has shown us about the importance of capacity, Bridgespan’s research has illuminated. In the United States, major funders highly favour programme grants at the expense of capacity building. In fact, three-quarters of US foundation giving goes to specific programmes or projects. At the same time, most major US foundations limit spending on indirect costs (which includes capacity building) to 15 percent of a total grant, which is less than half of what nonprofits spend on average.

Chronic underfunding ultimately also takes a toll on a nonprofits’ financial health. Bridgespan examined the financial records of nearly 300 nonprofits,that account for a third of the combined spending of the top 15 US foundations. The results came as a surprise. More than half (53 percent) suffer from frequent or chronic budget deficits—defined as at least two of the past five years. And 42 percent had fewer than three months of reserves (specifically, liquid unrestricted net assets) in the bank to cushion financial shortfalls. In fact, 30 of the 300 organisations showed no reserves—making them technically insolvent. “We can’t build nonprofit capacity until we solve the problem of chronic underfunding,” says Jeri Eckhart-Queenan, a Bridgespan partner. 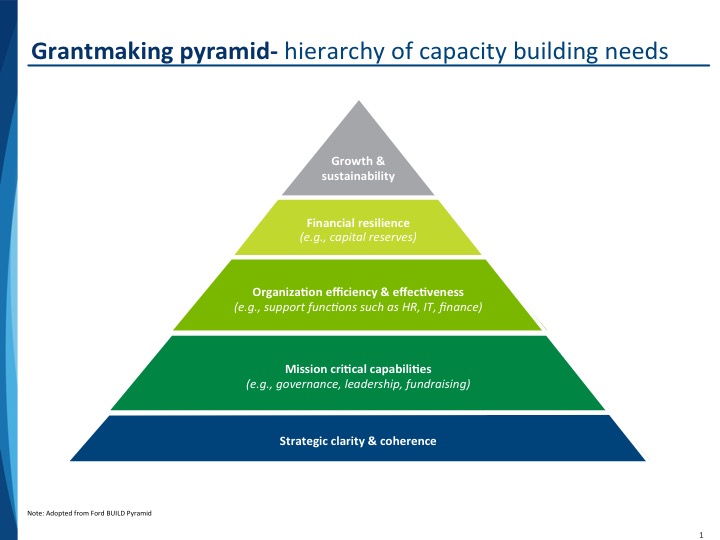 To that end, Bridgespan worked with the Ford Foundation in the United States to re-frame how funders and grantees think about building strong, resilient organisations. They developed a simple Grantmaking Pyramid (see chart) that lays out sequential steps, starting with strategic clarity at the base, followed by capacity building, organisational effectiveness, and financial resilience. Sustainability and growth, capping the pyramid, depend on getting these foundational steps right. That means funders must pay their fair share of grantees’ actual indirect costs, and grantees must know and share their costs to make that happen.

The same is true in India.

My (Amit’s) belief is that capacity building has a return on investment that is a multiple of programme investments, and is often self-sustaining.

Progress on this issue will require overcoming some barriers. Chief among them is lack of trust between some funders and nonprofits. Often, it is believed that mistrust stems from lack of transparency about what nonprofits actually do, particularly when it comes to financial accounting and reporting. “Our belief is that if there were a common set of accounting standards to begin with, it would enable comparison of numbers across nonprofits and shift the norms,” says a funder from a philanthropic organisation.

A starting point is to build a shared understanding in the sector of what capacity building entails.

While we believe one of the highest returns on investment a funder can attain comes from investing in leadership development, many nonprofits and their boards hesitate to send leaders to well-regarded training programmes that equip them with new ideas and practical techniques.

None of these barriers, however, pose insurmountable problems

A starting point is to build a shared understanding in the sector of what capacity building entails, and to codify good standards of practice. One way to do this would be to create a collaborative of large funders to champion the pivotal role of capacity building in ensuring that nonprofits across the country reach their full potential. It is a paradigm shift that won’t come easily, but one with huge potential to impact the lives of the people that nonprofits and their funders care about.

Quotes and insights in this article were expressed during a day-long “Pay What It Takes: Investing in Capacity Building” session hosted by EdelGive Foundation and The Bridgespan Group in Mumbai.

Tags: NGO capacity building
We want IDR to be as much yours as it is ours. Tell us what you want to read.
[email protected]
ABOUT THE AUTHORS 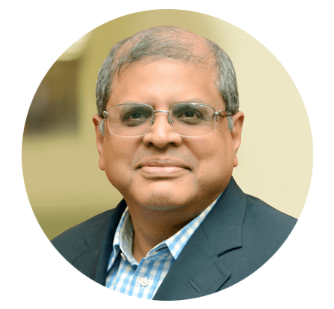 Amit Chandra is the managing director of Bain Capital, Mumbai, and a philanthropist. He is or has been a trustee of the Tata Trusts, a founder/board member of Ashoka University, a board member of Give India and The Akanksha Foundation. Amit is also a member of the advisory boards of Bridgespan India, the Centre for Social Impact & Philantrophy, and Swades Foundation.In Bain Capital, Amit is a part of the firm’s leadership team in Asia. Prior to this, he spent most of his professional career at DSP Merrill Lynch. Amit was named a Young Global Leader by the World Economic Forum in 2007 and was on the Asia's Heroes of Philanthropy list by Forbes in 2016, along with his wife Archana.