Finding the sweet spot for innovation within government systems

Three guiding principles for nonprofits looking to find where they best fit within government-run systems.

“A good tennis player can play with a broom and still win their matches,” a former tennis coach once told me.

Later I learned Roger Federer—in many minds, the most naturally gifted player of all time—spent years working with the sports equipment manufacturer Wilson to build a perfectly honed racket head for his game; designed with a “sweet spot” on the strings which made the most of his type of shots.

Since the founding of STiR—an NGO that uses networks to motivate teachers and teacher-support officials within governments—nearly seven years ago, we’ve been playing with a proverbial broom, not quite knowing where we best fit within government-run education systems. We kept thinking, “Let’s just get our core approach to sparking intrinsic motivation clear, and the system around us will largely take care of itself.”

Well, it did, sort of. At times, our adaptations have confused our partners and supporters—and even ourselves. We were also almost certainly too swayed by the dominant thinking on scaling in international development. But patience from donors, partners, and the systems themselves have allowed us to clumsily but earnestly discover, rather than design upfront, our true sweet spot. We hope our experiences can prove useful to other groups working in education and other areas of international development, who are trying to find their place within government systems.

STiR began in 2012 with a single pilot involving 25 teachers in Delhi. Today, we work with 200,000 teachers and six million children across four states in India and a quarter of all districts in Uganda. With the benefit of hindsight, we can see that we’ve actually tried out four distinct brooms over time.

Related article: The 3Ps of working with the government 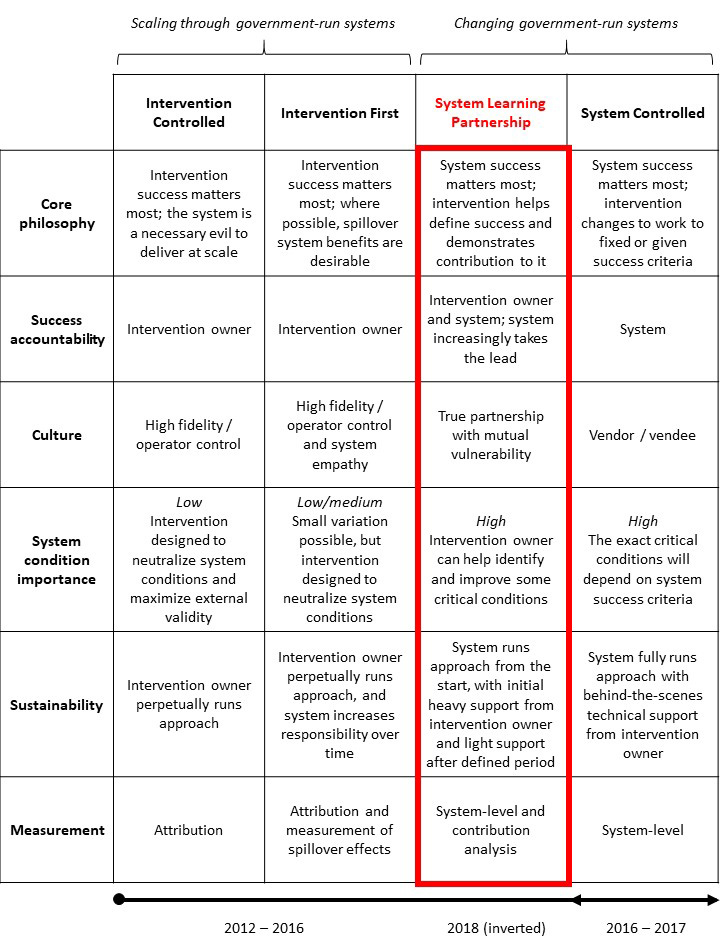 We’ve basically been moving from the left to the right of the continuum. We’ve almost overshot into “system controlled” in a few regions where we work, only to course correct. Each time, the impetus for testing a new sweet spot wasn’t the result of great internal wisdom; it was pressure from sage leaders within government-run education systems who saw a path we didn’t.

Today, we know everything in our operating model—including our values, measurement approach, and people-development strategies—needs to align to achieve a genuine system learning partnership. We rely on three guiding principles:

1. People are the solution, not just conduits to drive processes.

Too often we design for the lowest common denominator, meaning we try to use processes to control people within systems. In education, for example, that can mean forcing (often good) prescriptive practices that crowd out any sense of teacher autonomy.

The feeling that they are in control of their classrooms motivates teachers to want to become better and to work toward professional mastery.

Teachers in our networks need case studies showing what improves teaching practice. For example, they need to see how creating effective routines can maximize available learning time. But they also need a collaborative space to decide how to put that evidence to use in their own classrooms. So rather than creating tight dependency on a rigidly prescribed approach, we help teachers develop their own professional judgement through working with peers. The feeling that they are in control of their classrooms motivates them to want to become better teachers and to work toward professional mastery. It sounds basic, but we’ve occasionally compromised this belief by making the network meetings too prescriptive. Each time we did, it came back to haunt us; teachers and district officials were less inclined to do the kind of deep reflection that can lead to sustained practice.

2. We need to design for system conditions that optimize interventions.

Many organizations focus on designing the perfect intervention to fit an identified challenge. But unless we can persuade systems to adopt them, it’s unlikely we’ll achieve success. 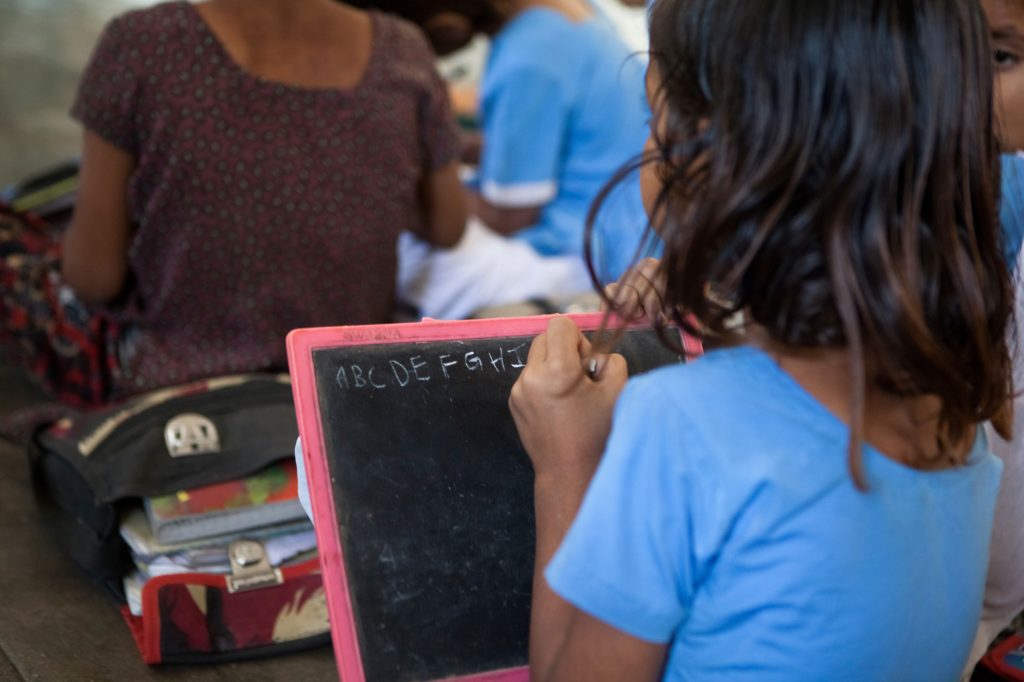 This insight made us realize that if we can get our intrinsic motivation approach right (and we still have much to improve), we can create three pathways to system impact:

We’ve created self-reinforcing linkages between all three paths. For example, the Delhi system initially lacked a well-functioning cadre of officials to run the teacher networks within its large secondary schools. We worked with the government to define profiles of who we needed and helped design a robust recruitment process. This not only made our own approach more effective, but also created a new structure to make other technical interventions more effective. We now need to develop innovative methods for measuring all three paths, rather than just the first.

Related article: The government as a partner – Making it work

3. Creating genuine partnerships is enormously demanding in terms of culture—but so worth it.

Genuine system learning partnerships require real honesty on both sides. We call it the “chai test”: Can we sit down over a cup of chai (tea) with leading officials and have an open conversation about the tough stuff?

A tough conversation around system conditions is really important, regardless of the sector you are in. We’ve come to learn that our particular approach is highly sensitive to four conditions:

Once an organization is clear about the system sweet spot they want to occupy, they should align their values and culture around it.

We’ve created a system diagnostic tool to help pinpoint these conditions. In general, we try to enter new government-run education systems either when these conditions already exist or when the government is authentically committed to them. But when we find ourselves working in a difficult system, we try to develop smart workaround strategies to circumvent challenges. For example, we found that we needed to introduce classroom observation to improve day-to-day classroom behavior. When existing supervisors didn’t have the time to assume that role in Uganda, we worked to allow teacher-to-teacher observation instead.

In the medium- and long-term, we will need to work with the system—and often the bilateral and multilateral donors that contribute to the system’s funding—to improve underlying conditions. That might mean, in Uganda, for example, revitalizing and reinvesting in the roles of supervisors in the first place.

Our hope is that by sharing these lessons from working within systems, we save others similar pain and perhaps fast track their gain. Every organization should think carefully and candidly about the system sweet spot they really want (and are best positioned) to occupy. And once they’re clear, they should align everything in their operating model around it—particularly their values and culture.

Contrary to what my coach told me, there really is no need to play tennis with brooms. Roger that.

This piece was written by Sharath Jeevan, Reinier Terwindt, James Townsend, and Nithya Gurukumar. It was originally published on Stanford Social Innovation Review.

Tags: education in India
We want IDR to be as much yours as it is ours. Tell us what you want to read.
writetous@idronline.org 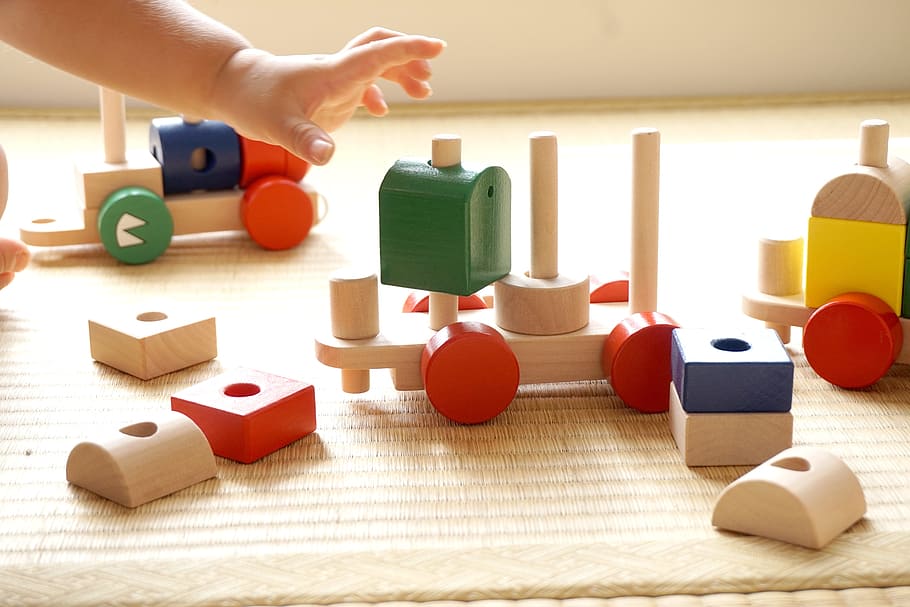 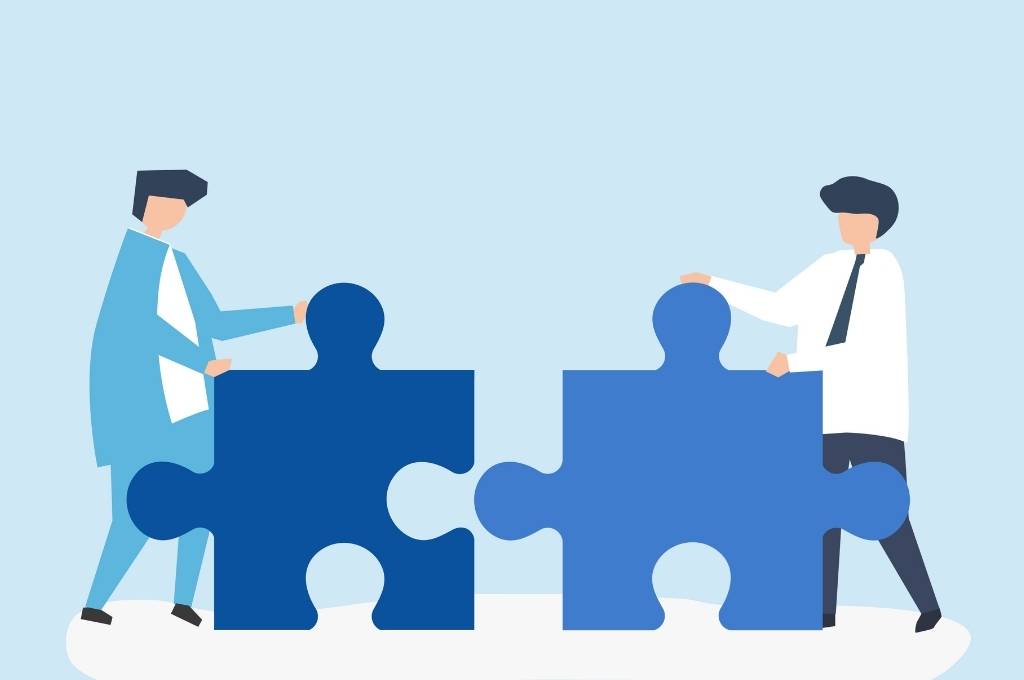