Tribal communities living around urban spaces face a host of issues when it comes to unlocking the full potential and value of their land.

When cities start expanding, or rural areas start urbanising, infrastructure needs to be developed—roads need to be built, transportation systems need to be put in place, and sewage lines and drinking water pipes have to be laid.

But what happens when the towns and cities begin to expand into adjacent lands, and those lands belong to tribal communities?

In Jharkhand, there are two acts—the Chhota Nagpur Tenancy Act, and the Santhal Pargana Tenancy Act—which protect tribal peoples’ right to their land, and hence prohibit sale of their land to non-tribal populations.

However, over the years, there have been amendments to these acts that have weakened the position of tribal people in rural areas, and haven’t helped those in urban areas either. At present, there are 64,000 litigations pending in the high court of Jharkhand, filed by tribal communities against these amendments.

Development needs land, as do the tribal communities

Ideally, a city’s development plan should consider the needs of the residents—in terms of roads, transport, public spaces, and commercial and residential zones. Therefore, for a city’s municipal corporation, the ability to access land in the right places is critical.

Ownership and access to land and forests has been critical to the tribal peoples’ way of life as well, given the symbiotic relationship they share with jal, jungle, aur jaanvar (water, forests, and animals).

Ownership and access to land and forests has been critical to the tribal peoples’ way of life.

Even if the city does not want to buy land owned by tribal communities, but would like to develop infrastructure that passes through these areas, there is resistance from the communities. For instance, if the government has to take sewage lines into a slum, they might need to go under tribal lands. And no one is willing to let them dig their lands to have sewage pipes running under them.

The resistance from the communities is valid since similar efforts in the past have led to land grab scams and transfer of land from the tribal communities to corporates. Also, the compensation rates provided for sale of land for public purposes was last done in 1970—this needs to be revised and tribal populations must be offered above-market rates.

To be done right, the government also needs to think of rehabilitation and resettlement as intrinsic to the development process, and they must be formulated with the active participation of the affected persons.

All of this requires a great deal of negotiation, which the government isn’t willing or keen to do.

Tribal people are unable to unlock the value of their land

In almost all cases of urbanisation, as cities expand into adjacent agricultural lands, farmers are able to unlock the value of their land; they can sell their land either to private developers or city authorities and reap the benefits of the sale. In the case of tribal communities however, the owners are not able to capitalise on the market demand for land.

The last survey of land ownership in Jharkhand was conducted in 1934; hence the last names recorded on it were the forefathers of the current generation. Since they weren’t allowed to buy and sell in the market, none of their progeny got the land records updated, as there was no incentive to do so.

What happens when the towns and cities begin to expand into adjacent lands, and those lands belong to tribal communities? | Photo courtesy: Wikimedia Commons

Till now, the descendants of the original landowners resided together. The land would stay whole, and the different families would build their houses on this common family land. Nobody bothered with how it was divided amongst them; therefore, there are no clear titles to the land.

As a result, these landowners are unable to access either housing finance from commercial lending institutions, or government schemes like the PMAY—both of which would give them benefits for building houses on their land.

While the government claims that everything is digitised, the process to update land records is inadequate and flawed.

To access either of the above, land records need to be updated.  But this is hard to get done. While the government claims that everything is digitised, the process has been inadequate and flawed. Moreover, marginalised tribal communities do not have the wherewithal to understand the online systems, and they face losses in wages due to the long delays encountered while dealing with the government system.

The offline process is also still very cumbersome—the descendants of the original landholders have to be identified, the ratio of division among them has to be agreed upon, and the land then needs to be demarcated to ensure the subdivision.

Given all of the above hurdles, and given that their land has no market, there is no incentive for them to go through this process.

Since the land cannot be bought and sold by non-tribal peoples, there is a growing segment of powerful and influential people within the tribal community itself, who are buying land from the small-holding, more vulnerable community members at very low rates—much lower than ‘market’ rates.

Most of the tribal community is therefore twice disadvantaged. First, they cannot build better houses on their land as they are unable to access housing finance—either via the government or the market. Second, they are unable to get a market rate for their land, to use those proceeds to buy other formal housing.

The communities are also seeing their traditional livelihoods disappearing

As their surroundings get more urban, we are beginning to see fewer and fewer tribal communities practising agriculture on their lands. Community members are turning to daily-wage trades like construction, and other service-oriented industries as their traditional occupation of agriculture disappears.

As their surroundings get more urban, we are beginning to see fewer and fewer tribal communities practising agriculture on their lands.

Water is also an issue, which adds to their hurdles around agriculture. Despite the fact that Jharkhand gets sufficient rainfall, tribal populations do not have access to piped water. While there are policies to ensure that these areas receive water, they do not necessarily translate into practice for two reasons—one is the lack of adequate infrastructure with regard to water and sanitation, and second is that the process that needs to be followed to get piped connections is so convoluted and time consuming that the poor cannot navigate these systems.

Most tribal community areas in Ranchi have both community wells and household level wells. However, because Ranchi is on a plateau, it’s difficult to retain water in summer months in the well. Moreover, even though they have wells on their land, the water in them is fast disappearing because the neighbouring formal housing societies have built borewells that are drying the older wells.

The lack of options is impacting tribal communities

The lack of viable options, both in terms of loss of agricultural activity and income, as well as inability to improve quality of life (through better housing and urban services) is impacting tribal society and communities. The Jharkhand Economic Survey 2015-2016 highlights that the unemployment rate of Jharkhand at 3.1 percent, was above national average of 2.7 percent. Slow industrialisation and lack of sustainable land reforms cause lower growth of jobs, which translates to high levels of migration, which then leads to human trafficking.

In essence, their entire way of life is changing rapidly, and for the worse. The worry is that if they are not connected to the kind of infrastructure that is available to the formal sector, and have their own traditions fast disappearing, there will be an issue. We therefore need to rethink this, both for the life and livelihoods of the tribal community as well as the city’s development

The acts were constituted in good faith and to protect the rights of the tribal peoples; however, urbanisation has forced them to change their way of life to a certain extent.  They are unable to unlock the potential of the land, and are being exploited by powerful elements—both within their community and outside of it. It might therefore be time to understand ground realities in greater detail, review existing provisions, and introduce amended laws that serve the interests of urban tribal peoples.

We therefore need a broader concerted effort on the part of the planners to include tribal communities in the displacement, rehabilitation, and resettlement process framework. And they should include not only those who directly lose land and other assets, but also those who are affected by such acquisition of assets.

Tags: adivasi communities, land rights, tribal rights, urban development
We want IDR to be as much yours as it is ours. Tell us what you want to read.
writetous@idronline.org
ABOUT THE AUTHORS 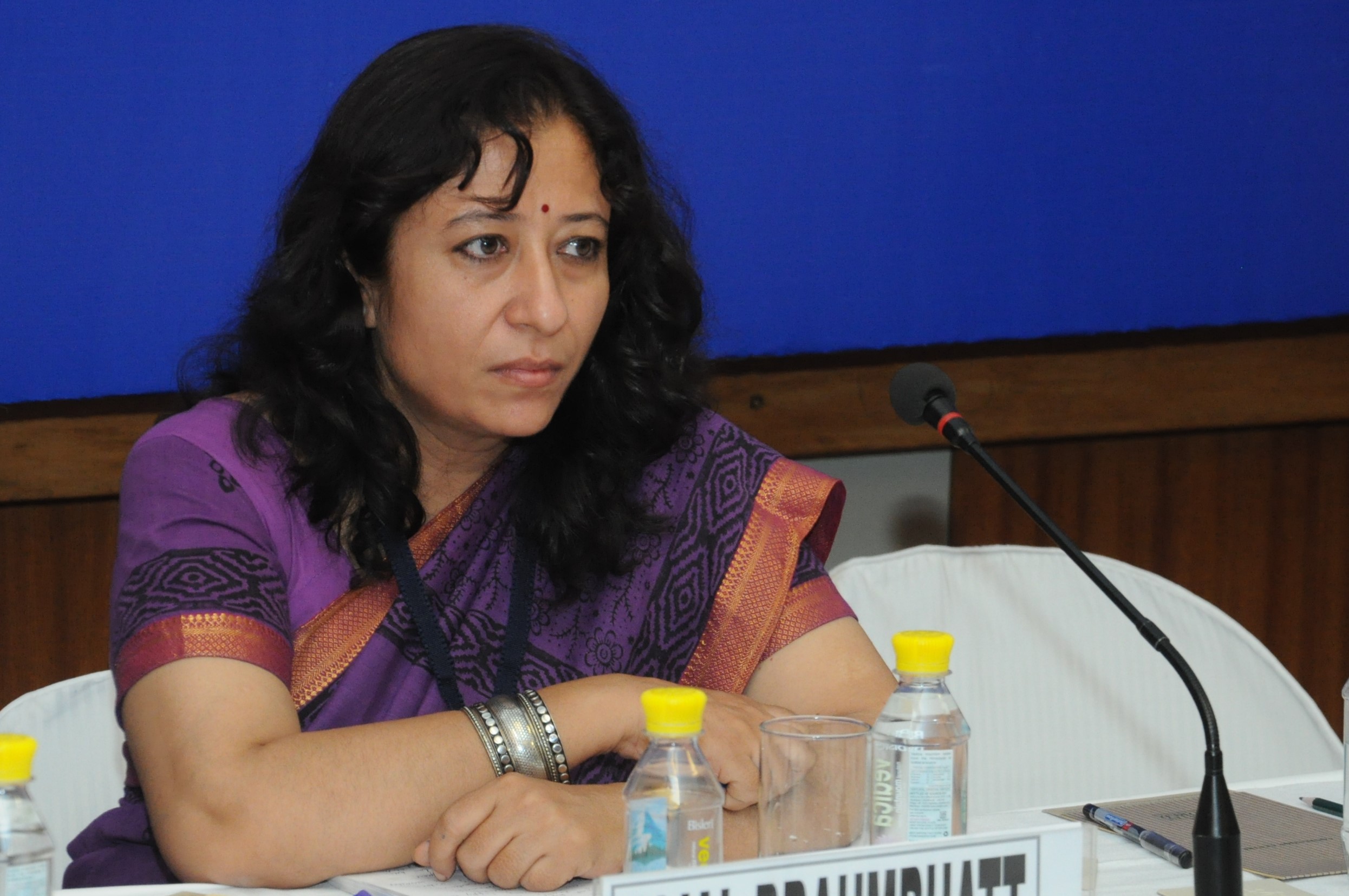 Bijal Brahmbhatt is currently Director, Mahila Housing SEWA Trust (MHT). She is a civil engineer by training and a recognised expert in habitat improvement, community development, and housing finance. She oversees MHT’s operations at the national level. She has proven experience in conceptualising, planning, managing, and providing support for slum upgradation programmes across India. She also has expertise in land tenure and renewable energy issues, and has authored papers on habitat, housing finance, community development, and land tenure with World Bank, CEPT University, WIEGO, and so on.