Why are teenage girls not going to school?

Evidence from the Teen Age Girls (TAG) survey, that spoke to 74,000 girls across India, throws light on the girls that leave education early, the barriers they face, and the way forward.

The draft National Education Policy released this June calls to broaden free and compulsory education to all children ages 3-18, extending the right to education from Class 8 to Class 12. It also proposes establishing a Gender Inclusion Fund charged with the ambitious goal of ensuring “100 percent participation of girls in the schooling system”.

This aim may not be so far out of reach. India has made strides in increasing enrolment rates, particularly at the primary level. Over 95 percent of primary-aged girls were in school in 2015-2016, up from 81 percent a decade prior.

The challenge lies with secondary school. This is where enrolment rates drop off and where many of the most impactful benefits of girls’ education are realised–higher earning potential, delayed marriage, better health, and increased agency.

The challenge lies with secondary school. This is where enrolment rates drop off and where many of the most impactful benefits of girls’ education are realised.

Together with KC Mahindra Education Trust, Naandi Foundation conducted India’s first nationally representative survey of teenage girls in 2016-17. Our team undertook the Teen Age Girls (TAG) Survey after recognising two things: first, India needed stronger evidence-based programmes and policy for adolescent girls. Second, there was no existing national data on the specific concerns of this group. India’s 80 million teenage girls will determine the country’s future, and it is urgent that we help them thrive by addressing their unique challenges. To do this, we first needed to understand them.

Our TAG surveyors spoke to a representative sample of over 74,000 girls from every state of the country. We asked them about their realities and aspirations, in the process forming a detailed picture of their experiences with education.

The survey gave us the heartening news that 80 percent of teenage girls were studying. It also drew our attention to the barriers faced by those who are not. We hope that knowing who these girls are, where they live, and why they have left education can give practitioners a springboard to implement the right solutions in the right places.

Who were the girls that left education early?

I focus here on girls who either never went to school or dropped out before reaching Class 12. Understanding and supporting this group is crucial to closing the secondary school enrolment gap. In order to appropriately estimate the pre-Class 12 dropout rate, this analysis includes only 18-19 year old girls. Many younger teenage girls were still studying in Class 11 or below.1

The percentage of teenage girls that were studying decreased steadily as girls got older. By the time they were 18-19 years old, more than a quarter of girls had either never gone to school (4.4 percent) or had left education before Class 12 (22.2 percent). Those who did not reach Class 12 were disproportionately from lower wealth quintiles and rural areas. 16 percent were from Scheduled Tribes, compared to only 9 percent of their more educated counterparts. 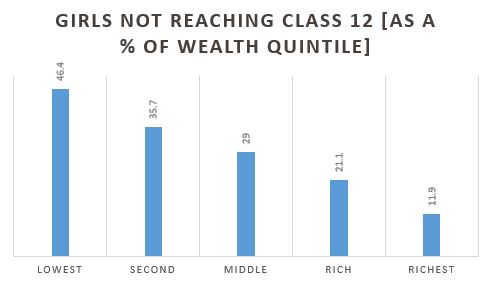 Source: TAG Survey 2016-2017 | Percentage of the 18-19 year old girls in each wealth quintile that either never went to school or left education before reaching Class 12

The scale of the issue varied greatly by region. The rates were most alarming in India’s North-Central heart. Half of girls in Madhya Pradesh and Odisha did not reach Class 12. 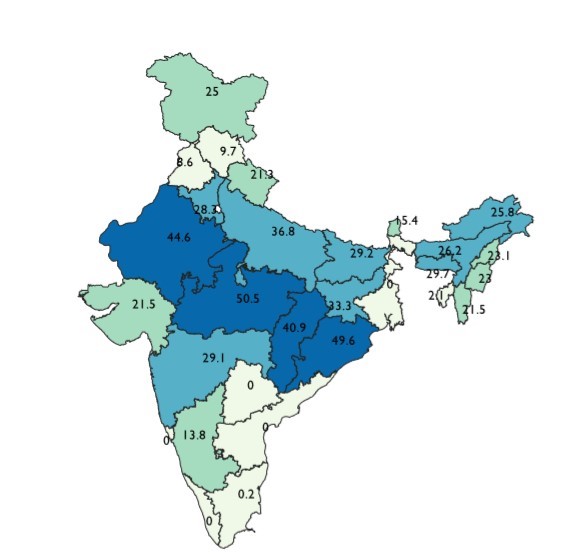 The discrepancy in mothers’ education levels was even greater, in line with evidence linking mothers’ and children’s educational attainment.

What keeps girls from reaching Class 12?

The most common reason girls cited for not attending school was parents’ financial problems. This might imply that parents could not afford school expenses such as textbooks or commute fares, or that they needed financial support from their daughters. 45 percent of girls who did not reach Class 12 because of their parents’ financial problems reported having worked for pay, compared to 28 percent of 18-19 year olds who did reach Class 12.

One in four girls out of school before Class 12 attributed their dropping out to gender-based standards for girls, including attending to housework or sibling care or following community norms for girls’ education. 61 percent of these girls agreed that boys in their communities had more opportunities for education, and only 10 percent believed that men or boys in their communities could do as much housework as women or girls.

One in five girls who did not reach Class 12 referenced illness or disability (her own or a family member’s), migration, absence of parents, or an emergency situation.

These girls said the lack of an appropriate school nearby kept them from studying. 90 percent of girls that gave this reason lived in rural areas. Indeed, a girl’s likelihood of having a neighbourhood school decreases quickly as she gets older: there are more than 14 times as many schools in India for students in classes 1-5 students as there are for students in classes 11-12.

6 percent of girls who left school early did so because they were uninterested in further studies. 5 percent left because they failed an exam or struggled in school.

15 percent of 18-19 year olds who left school before Class 12 were married, compared to 8 percent of their peers with more education. However, only 4 percent of girls who have discontinued education early cited engagement or marriage as a reason. 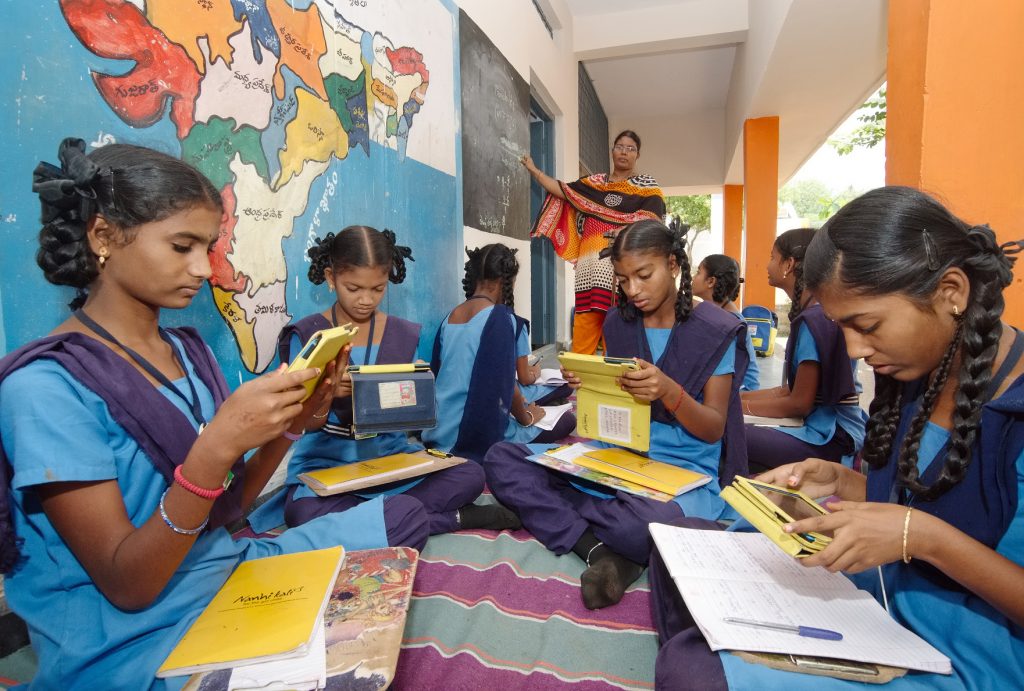 The path to 100 percent ‘girls in school’

Reaching full girls’ enrolment through Class 12 will require working with those who are most likely to struggle: girls from low-income, low-education families in rural areas, particularly in Rajasthan, Madhya Pradesh, Chhattisgarh, and Odisha. It will also entail stronger support and accommodations for at-risk girls, including those living with health challenges or disabilities, in emergency situations, and as part of migrant families.

Reaching full girls’ enrolment through Class 12 will require working with those who are most likely to struggle: girls from low-income, low-education families in rural areas.

The majority of girls who were out of school cited reasons related to financial difficulty or gendered expectations, suggesting that scholarships, cash transfers, and social norms change interventions will continue to be useful tools to build an enabling environment for girls’ education. We can also advocate to expand the number of secondary schools in rural areas, as the Sarva Shiksha Abhiyan programme did for primary schools.

Of course, our work is not finished when all girls are in classrooms. The quality of their education and the existence of meaningful choices upon passing Class 12 are even more important. Even so, school attendance is an essential first step–and with the resources and determination, a step we can and should reach sooner rather than later.

Tags: NEP 2020
We want IDR to be as much yours as it is ours. Tell us what you want to read.
[email protected]
ABOUT THE AUTHORS Rachel Wilder works in Naandi Foundation's Policy and Strategy Cell, where she conducts research and contributes to large-scale programmes with a focus on girls' wellbeing. Her primary area of interest is the intersection of gender, education, and economic development. Rachel holds a bachelor's degree in economics and international studies from the University of Central Florida.