Experts are recommending the use of information and communication tools to help farmers regain faith in crop insurance schemes.

From the Comprehensive Crop Insurance Scheme (1985) through the National Agriculture Insurance Scheme (1999-2000), Modified National Agriculture Scheme (2010) and on to the Pradhan Mantri Fasal Bima Yojana (PMFBY) (2016), India’s agricultural insurance schemes have undergone several changes in their approaches. Mitigating risk in the agricultural sector has a direct implication for agricultural productivity and farmer welfare. It also intersects with some of the key sustainable development goals (SDGs), such as ending poverty, achieving food security and curbing hunger.

In spite of the government’s good intentions, assessments of the PMFBY face several challenges that make processing and verification of insurance claims error-prone and time-consuming. Payouts do not reach farmers at the right time and in amounts commensurate with their losses. Many experts and organizations working in this area are now recommending the use of information and communication (ICT) tools to help farmers regain faith in crop insurance schemes and make them more efficient and transparent.

The International Initiative for Impact Evaluation (3ie) has funded a number of studies that explore the feasibility of using ICTs in the field of agricultural risk mitigation. A 3ie-funded study conducted by researchers at the International Food Policy Research Institute demonstrates how to capitalize on the availability of low-cost internet and the rising use of smartphones. This study looks at the effectiveness of a smartphone-based app amongst 750 smallholder wheat producers across Haryana and Punjab—the second and third highest wheat-producing states in India, respectively.

Based on the assessment, payments for losses are directly issued to the farmers’ bank accounts.

The novel picture-based insurance (PBI) product welds technology with weather index based insurance (WBI). Farmers are asked to take pictures from the same site with the same view frame two to three times a week throughout the cropping season. The series of images thus created helps insurance agencies examine the condition of the crops. Based on the assessment, payments for losses are directly issued to the farmers’ bank accounts. Additionally, the application also provides customized agricultural advisory to farmers by experts, ensuring continual interaction. Initial findings have been promising. In the evaluation sample, farmers demonstrate relatively higher uptake of the PBI.

Another study by the Centre for Budget and Policy Studies (CBPS) examines the PMFBY in Karnataka, which incorporates the use of mobile technology to record and upload the crop-cutting experiments (CCE), a mechanism to determine the overall yield of the village. An Android-based mobile application records and transmits the CCE data using smartphones. This data is transferred to the central crop insurance portal, making it available in real time to government officials and insurance companies. The smartphone data improves data quality as it contains vital information, such as photos and videos of the particular area, geo-tagging and time stamping crop area, probable harvest date, net weight of the produce obtained after harvesting and weight of the wet yield. The use of ICT is expected to quicken compilation of data, verification and faster settlement of claim. 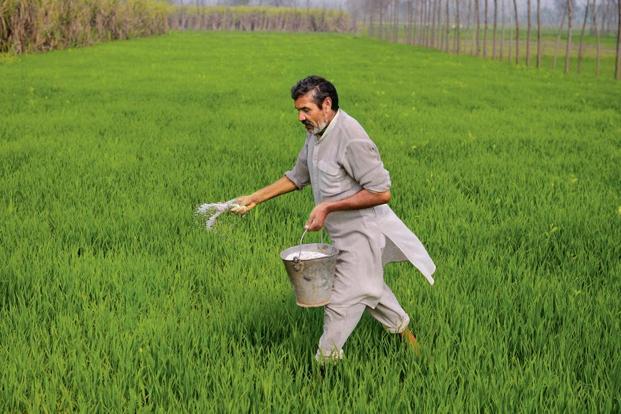 The use of mobile-based technology can also help allied activities. Throughout India, the adoption of livestock insurance is much lower than crop insurance. A similar evaluation study tested an app that would digitize livestock insurance registration in Gujarat. If successful in replacing some components of the offline process, this could significantly reduce the costs and increase adoption. This study by the Institute of Financial Management and Research corroborated the importance of having sufficient infrastructure and network to roll out the product.

This may outweigh the commonly assumed risk that farmers wilfully neglect their farms once they are insured.

ICTs can address not only supply side and process-related bottlenecks but also influence behaviour change on the demand side. For example, ICTs such as the PBI that require farmers to participate may induce farmers to develop a vigilant attitude towards any loss of crop. Indeed, a number of farmers reported that visiting their fields more, even if it was to take photographs, made them more aware of the state of their crops. This may outweigh the commonly assumed risk that farmers may wilfully neglect their farms once these are insured. An encouraging finding from a formative evaluation of the PBI shows that farmers in a randomly assigned treatment group that received PBI were no more likely to report lower yields than a control group that received a regular WBI.

Formative and process evaluations of ICT-based programmes, usually done at the beginning of a programme spanning over a few months, can help policymakers take prompt programme-specific decisions. These evaluations typically have small sample sizes. By identifying various challenges, such evaluations can lead to better programme selection and design that are cost-effective. However, policymakers often demand more rigorous evidence to take informed decisions to scale up ICT-based programmes that aid agricultural insurance schemes. Impact evaluations that are based on counterfactuals with a large sample size, and conducted over a longer period, can surely inform scaling up and replicability of such programmes. And in turn, the resultant socioeconomic impact will help farmers across India.

Tags: agriculture, farmers, insurance, technology
We want IDR to be as much yours as it is ours. Tell us what you want to read.
writetous@idronline.org
ABOUT THE AUTHORS

Zeba provides research support for 3ie’s programmes on Agricultural Insurance, Transparency and Accountability, Governance and Social Protection. Prior to joining 3ie, Zeba worked with the communication team at Shakti Sustainable Energy Foundation. She has also worked on research projects with the World Health Organization, National Council of Educational Research and Training, and Public Health Foundation of India. Zeba has a bachelors in Sociology from Delhi University, a masters from Jawaharlal Nehru University and an MPhil in Sociology from the Delhi School of Economics.

Bidisha reviews and manages research funded through 3ie’s Agricultural Insurance Thematic grant windows, along with Open Windows and Policy Windows. She leads 3ie’s professional services related to evaluation of the National Rural Livelihoods Mission. Bidisha has an doctorate degree in Economics from the Delhi School of Economics. As part of her doctoral research, she evaluated the impact of large-scale school meals in India.

Agriculture
8607
SUPPORTED BY ICC
Reducing air pollution due to stubble burning in Northwest India
Philanthropy can play a role in mitigating air pollution and environmental degradation caused by agricultural practices in Punjab and Haryana.
by Rayan Sud | 6 min read
COVID-19: Click here for insights and analysis, or if you want to support efforts to fight the crisis in India